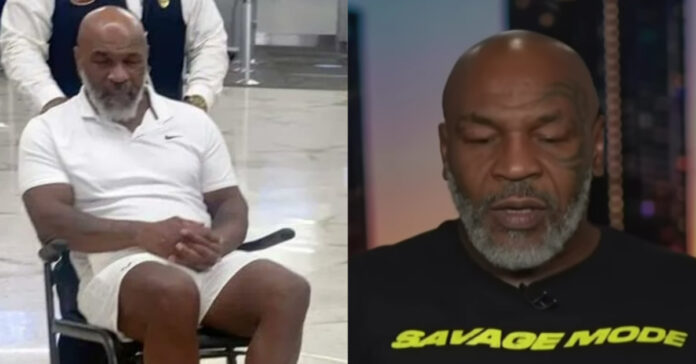 Heavyweight boxing legend ‘Iron’ Mike Tyson had fans worried after the 56-year-old combat sports icon was seen being transported in a wheelchair and looking noticeably frail in recent images. Fans first became concerned about Tyson’s condition and overall well-being after admitting that he felt his ‘expiration date’ was quickly approaching in a conversation with therapist Sean McFarland.

“We’re all gonna die one day, of course,” Tyson said. “When I look in the mirror, I see those little spots on my face, I say, ‘Wow. That means my expiration date is coming close, really soon.’”

Concerns were heightened when the pictures of the former world champion in a wheelchair started making the rounds on social media. Recently, Mike Tyson appeared on NewsMax TV to explain the images and the health issues he has been fighting with.

“Thank God it’s the only health problem I have. I’m splendid now. Everybody in my life is truly blessed and we’re all very grateful for whatever we have.”

According to MayoClinic.org, “Sciatica refers to pain that radiates along the path of the sciatic nerve, which branches from your lower back through your hips and buttocks and down each leg.”

Mike Tyson Walked Away From Boxing in 2005, but Briefly Returned in 2020

Mike Tyson, still known by many as the ‘Baddest Man on the Planet,’ officially retired from the world of professional boxing in 2005. He holds a record of 50-6-2 and was the first heavyweight boxer to simultaneously hold the WBA, WBC, and IBF titles. Bill Caplan of The Ring magazine listed Mike Tyson as one of the 20 greatest heavyweights of all time.

In 2020, ‘Iron’ Mike returned to the squared circle for an exhibition bout with fellow boxing legend Roy Jones Jr. Following the event’s success, offers began rolling in for Tyson who received multi-million dollar proposals to step back into the ring for exhibition bouts, including a potential meeting with YouTuber turned professional boxer, Jake Paul. However, it sounds as though Tyson is no longer interested in competing and no amount of money will change that.

“Guys want to fight me for 100 million bucks,” Mike Tyson said. “I don’t think I’ll ever do stuff like that anymore. I wanted to do it the first time, just for fun to have fun. Then some people took it to another level and made it financial, and then the fun went out of it.”