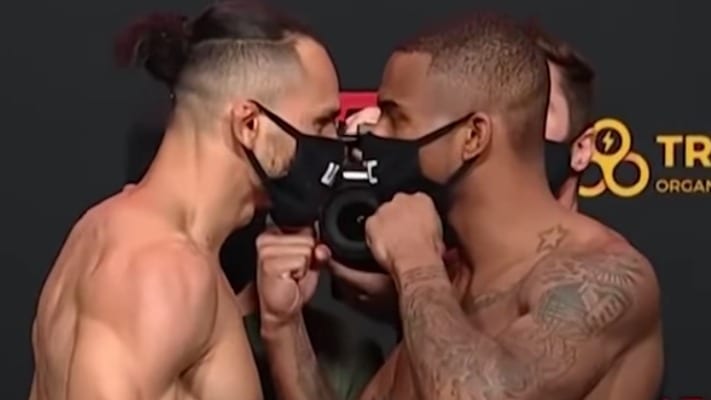 Next up on the UFC Vegas 17 main card is a welterweight bout between Michel Pereira and Khaos Williams.

Round 1: The pair touch gloves and we’re underway. Williams lands a leg kick. Pereira lands a one two and follows it up with a leg kick right after Williams attempts a leg kick. Williams catches a kick but fails to connect on Pereira when he blitzes forward. Williams blocks a head kick before landing a leg kick soon after. Pereira misses a front body kick as the two clinch up momentarily before returning to striking. Pereira dodges an overhand right however eats a big counterpunch after landing a kick soon after. Williams is now gradually cutting the cage. He lands another right punch just as Pereira attempts a front kick but the latter is able to eat it again. Can he keep doing that? Pereira lands a nice one two and follows it up with a knee. Williams slips a head kick. The round ends with Pereira flying high with a knee that misses.

Round 2: Williams is much more active to start the second. Pereira continues to use movement to evade Williams. Pereira catches the chin of Williams with a big right. Williams blitzes forward now and lands but Pereira clinches with him soon after. Williams has Pereira clinched up against the cage now as he lands knees. Pereira separates and they return to striking. Williams lands a couple of leg kicks. Pereira eats another big right from Williams but seems to have the momentum now despite having the significant strike disadvantage. Pereira blocks an overhand right and continues to evade the jabbing of Williams. Pereira lands a nice front kick to the body. Pereira now has Williams up against the fence with his pressure. However, Williams blitzes forward and lands three solid shots on Pereira who continues to eat those shots. Pereira is clinched up against the cage but reverses and now lands knees to the body of Williams. They separate. Pereira lands a body kick and a one two. He then grabs the back of Williams and attempt a choke but the round comes to an end.

Round 3: Pereira continues to land while Williams struggles to connect with his counters. Pereira lands a nice left hook but has to eat some leg kicks. Pereira starts to dance and loosen up a bit more like we’re used to. He sees his head kick attempt blocked by Williams soon after. He attempts an acrobatic kick from the ground but doesn’t land. Pereira lands a hard front body kick. Williams misses a head kick and absorbs another front body kick. Pereira times a takedown well and gets him down. He’s in side control as he looks to finish the fight. Williams does a great job of getting back to his feet but is clinched up against the fence. They separate and return to striking with one minute left in the fight. Pereira seems to have connected with a head kick but Williams eats it and keep striking. Pereira changes levels and gets Williams down again. He lands strikes from the top as he ends the fight strong.