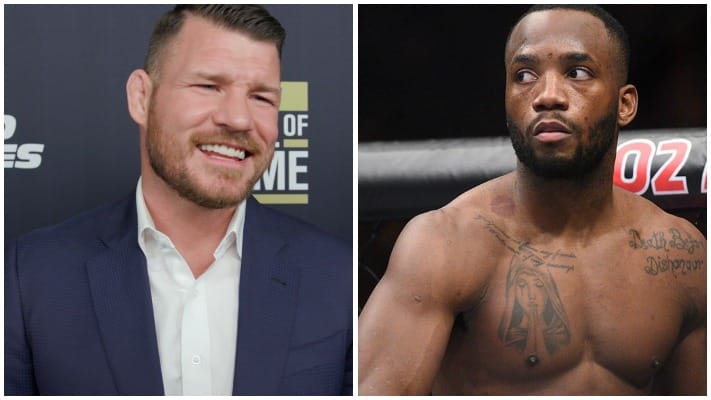 Michael Bisping has told his compatriot Leon Edwards to fight Jorge Masvidal instead of sitting out and hoping he’ll get a welterweight title shot.

‘Rocky’ appeared to establish himself as the top contender at 170lbs when he beat Nate Diaz over five rounds at UFC 263 to stretch his winning run to nine straight fights.

The Englishman recently announced his intention to sit out and wait for a shot at the welterweight title which will be on the line when Kamaru Usman and Colby Covington rematch at UFC 268 on November 6.

“My next fight will be for the world title I don’t want to hear nothing about a guy coming off 2 fight skid and Got ko his last fight,” Edwards wrote on social media.

The post triggered an angry reaction from his fellow 170lb contenders Gilbert Burns and Jorge Masvidal. During a recent episode of the Believe You Me podcast, Bisping revealed he wasn’t a fan of Edwards planning to sit out either as he believes ‘Rocky’ should want to settle his personal beef with ‘Gamebred’.

“Leon Edwards came out publicly and said he doesn’t want to fight Jorge Masvidal,” Bisping said. “He says that he’s got no interest in fighting him because he [Masvidal] is on a two-fight skid… It just frustrates me a little bit… That’s the fight you should definitely go after… Let’s remember Masvidal assaulted him [Edwards] and punched him backstage. As a man, you should fight him [Masvidal].”

Bisping is also concerned that should Edwards choose to sit out he will not be given a title shot.

“I don’t think he [Edwards] is gonna get it [title shot].” Bisping said. “You could be waiting around for a long… long time for a fight that’s never going to happen.” (Transcribed by Sportskeeda)

Do you agree with Michael Bisping? Should Leon Edwards fight Jorge Masvidal instead of waiting for a shot at the welterweight title?