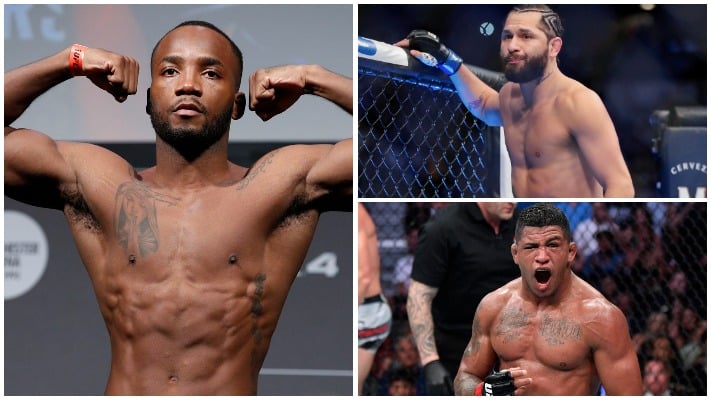 Leon Edwards recently declared that he has no interest in settling his beef with Jorge Masvidal inside the Octagon. The streaking welterweight contender says he will instead wait for his shot a UFC gold.

‘Rocky’ is coming off a dominant decision win over Nate Diaz at UFC 263 in June. Edwards was wobbled in the fifth and final round of the fight but clearly believes that win was enough to secure him a long-overdue title shot.

“My next fight will be for the world title,” Edwards tweeted. “I don’t want to hear nothing about a guy coming off of a two-fight skid and got KO’d in his last fight.”

Masvidal took to social media to respond to Edwards’ post that was clearly referencing him.

“If you not gonna fight then keep my name out your p**sy a*s mouth you clout chasing biatch #supernecessary,” Masvidal wrote.

‘Gamebred’ has dropped to consecutive defeats against Kamaru Usman. ‘The Nigerian Nightmare’ scored a lopsided decision win when they fight fought before knocking Masvidal out in their second meeting.

The UFC fan favourite is now looking for his route back to the welterweight title and it appeared that a fight with Edwards was very much on the table until recently.

Gilbert Burns is another man trying to work his way back into title contention. The Brazilian submission specialist suffered a third-round knockout loss when he challenged Usman for the welterweight strap at UFC 258. ‘Durinho’ has since picked up an impressive three-round decision win over Stephen ‘Wonderboy’ Thompson but it appears he’ll need a least a couple more wins to earn another shot at the champ.

Burns took to social media to mock Edwards’ for refusing to fight Masvidal.

“Man this make zero sense to me,” Burns wrote on Twitter. “First the guy hit you with 3 pieces and a on your on country nothing happened. You being asking for this fight for years, last month you just did and now you turn the fight down it’s just me or this guy doesn’t like to fight? It’s crazy!”

Usman is set to defend his welterweight title against Colby Covington at UFC 268 on November 6.

So, Edwards is almost certainly out of action for the rest of 2021 waiting for a title shot he might not actually get.

Do you think Leon Edwards should fight Jorge Masvidal or Gilbert Burns instead of waiting for a title shot?