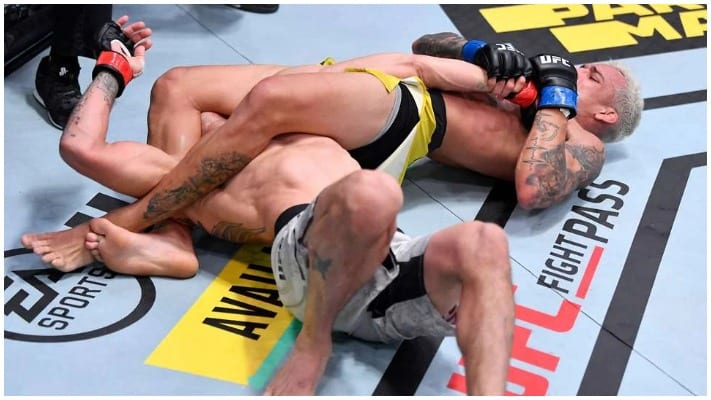 Ferguson suffered a unanimous decision defeat to Charles Oliveira at UFC 256 earlier this month after getting dominated over three rounds. That made it two losses in a row for the former interim champion who suffered his first setback since 2012 earlier this year following a fifth-round TKO defeat to Justin Gaethje.

While it could be a case of Ferguson simply losing to two of the best lightweights in the world, many observers believe he is showing signs of decline.

“…He didn’t look the same,” Bisping said on his podcast (via MMA News). “He didn’t have any good moments. And I just feel because of the amount of damage over the years, now we’re starting to see a decline in what he can do in the Octagon.”

Ferguson certainly took a lot of damage in the Gaethje fight and even acknowledged it later on. That said, Bisping doesn’t expect him to just stop fighting because of all the cumulative damage he has absorbed over the years.

Instead, he believes Ferguson needs someone to step in and advise him against competing further.

“If we know Tony Ferguson, he’s not the type of guy to sit around and say, ‘Oh, no, no, no, I’m done. I’ve taken too much damage.’ No, he’s gonna say the opposite,” Bisping added. “He’s gonna say, ‘No, I’m fine. I got beaten. Maybe there was some mistakes in camp’ or whatever. Tony’s not going to accept that he’s on the decline.

“That’s what fighters do. Fighters never accept that. Fighters need somebody else, a third party to step in: a manager, a loved one, a wife, a coach, a friend, president of the UFC…who knows, we’ve seen that happen many times…to step in and say, ‘Tony, Tony, Tony, you’ve taken a lot of damage these days.’”

It’s certainly a bit harsh to assume Ferguson is completely finished at the highest level. After all, he deserves credit for not being stopped by Oliveira despite fighting the majority of the fight with his left arm compromised.

However, should Ferguson lose again and take considerable damage doing so, it might be time to consider hanging up the gloves.