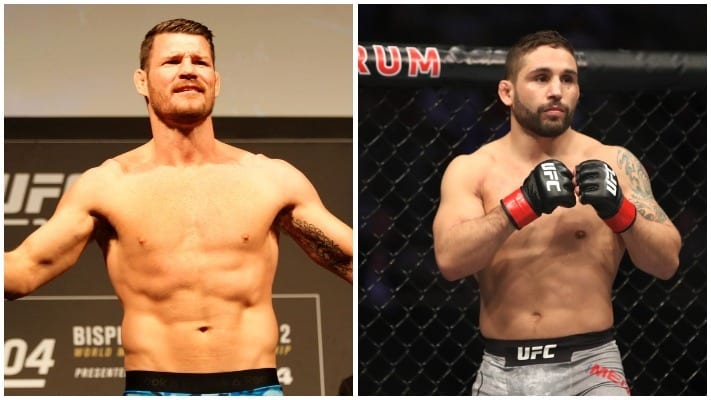 Former UFC middleweight champion Michael Bisping has blasted “steroid cheating f*ck” Chad Mendes after the two-time featherweight title challenger made some negative remarks about him on social media. The beef between Bisping and Mendes stems from an Instagram post from retire middleweight Tim Kennedy who was celebrating the sixth anniversary of his win over ‘The Count’, he wrote.

“On this day six years ago in the main event of the UFC Ultimate Fighter Finale I beat the living crap out of a foul mouthed asshole who is to this day still talking shit. I would care less except that he cheated in a fight against one of my friends, spit on another one of my friends, and then talks nonstop crap about the United States. So this dude has made it into my internal hall of douchebags.”

In the comments Mendes backed up his friend Kennedy and Bisping took issue with that, speaking on the Believe You Me podcast, he said.

“I did see Chad Mendes the wee f*cking sh*te,” Bisping said on his podcast. He f*cking went on Tim Kennedy’s page and called me ignorant, disrespectful and all this type of stuff.”

“You little steroid cheating fuck. Don’t be sour because your career amounted to nothing. Ignorant and disrespectful? What, like disrespecting the sport by taking steroids by dishonoring yourself and your opponent in a sport that someone could die? Shame on you, you little dipshit.” (Transcribed by BJPENN.com)

Mendes has since posted his rebuttal in which he explains his USADA ban, mocks Bisping’s eye injury as well as the Brits loss to Dan Henderson, he wrote.

“Hey @mikebisping let’s get some shit straight here. When I LET usada suspend me it was for a banned peptide under their rules. NOT a steroid. Just to put some shit into perspective for morons like you, too much caffeine in ur system is a violation under usada rules. That entire system is the biggest crock of shit ever implemented into the @ufc. Unlike all these other guys getting “popped” and making up the worst excuses ever to wheel and deal their suspension down, I owned that shit like a man. Now keep my name outta ur mouth u old, wooden eye having prick before I snatch ur soul like my boy @danhendo did…. gtfoh #alwaysrunningyourmouth”

Who are you backing in this beef between Michael Bisping and Chad Mendes?