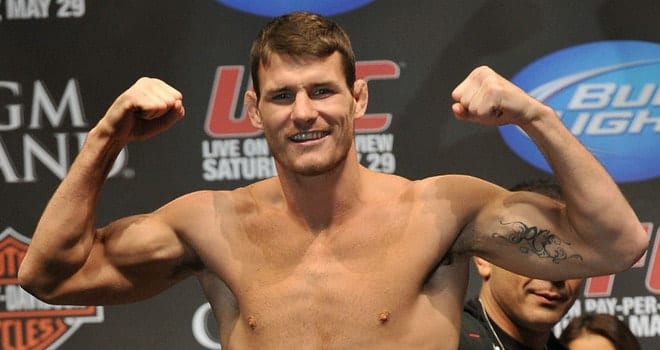 UFC middleweight veteran Michael Bisping recently got back into the win column with an impressive fourth round TKO of Cung Le in the main event of August 23’s UFC Fight Night 48 from Macau, China. Immediately after the win, Bisping called out his trash talking dance partner, No. 5-ranked Luke Rockhold.

Appearing on today’s episode of The MMA Hour, Bisping recalled a situation in which a hungover Rockhold came up to him and his father having coffee the morning after his win over Le. Apparently Rockhold, whose beef with Bisping dates back to a sparring session that lead Bisping to believe he was the “unofficial Strikeforce champion,” began talking about his recent bold claim that he’s willing to bet his entire fight purse that he can finish Bisping inside the first round.

Not surprisingly, “The Count” took offense to this. His words:

“So he comes over: ‘Hey Bisping, one round. Come on, I’ll finish you in one round and I want your purse.’ He started going on about that stupid bet that he does, and I just said, ‘Look at the state of ya. Go home, sober up, and stop making a fool out of yourself.’

Maybe if I was younger,” continued Bisping, “There might have been a situation when we were having the coffee. But in this occasion, I’d done all my fighting the night before, and I’m a professional, so I just ignored him. I laughed at him, I took the higher ground. But make no mistake; I do want to fight that guy, for sure. He needs to be taught a lesson. He needs to be put in his place.”

Bisping continued on about Rockhold’s brash bet. Noting that he’s never once been finished in the first round and also has a lot more money to lose:

“I’ve never been finished before in one round in my life,” Bisping said flatly of the idea. “I don’t know why Luke Rockhold thinks he’s going to be the first to do it. But it’s not exactly a fair bet, is it? Let’s be honest, my purse is a little higher. I’ve been around a lot longer than Luke Rockhold.”

Still, the British “Count” won’t back down. Although they both lost to vicious Vitor Belfort head kicks in 2013, Bisping did last until the second round. It’s a fact that he’s well aware of:

“But I’ll have a gentleman’s bet. I’ll challenge him to a fight, and the winner takes all, you know what I mean? I’ve never been finished in one round in my life. I’ve certainly never been finished in one round like he did against (Vitor) Belfort. So he just needs to shut up, really, and focus on his fights. I see him hanging out at pool parties, he’s cupping tigers’ balls.

The real question is, did he take that tiger to a pool party after he was done feeling him up? The guy slowly but surely is turning into a bit of a laughingstock. Just get back to business, get back to winning fights, and people will take you seriously again.”

From the sound of things, Bisping is back to full smack talking strength, and he’s always been one of the best. But the UFC is reportedly focused on booking the rising Rockhold against Lyoto Machida for an upcoming card in Brazil. Will Bisping and Rockhold ever get to fight it out in the cage?