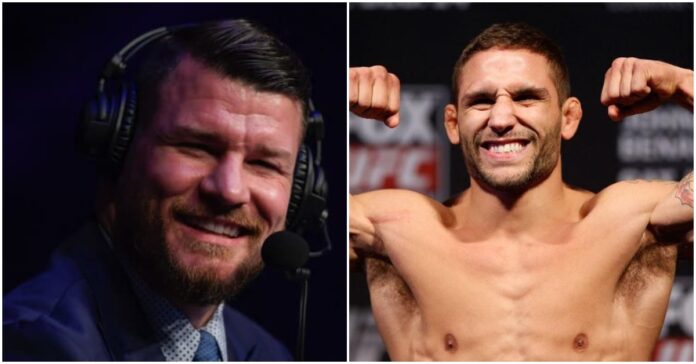 Mendes made his debut in the sport against Joshua Alvarez in a 155-pound matchup and stopped him in the fourth-round via TKO.

His performance caught the eye of ‘The Count’ who believes there may be a sneaky reason that Chad Mendes looked so much bigger compared to his time in the UFC.

“I don’t know if they test in Bare Knuckle FC, but Chad “Mini” Mendes wasn’t looking so “mini.” He was looking bloody jacked (as) f—k.”

“But he had a great performance, so God bless him. What was it, a lunging left hook? Or a lunging right hook? Beautifully timed, it was nice.” (Transcribed by bloodyelbow.com)

Mendes was suspended back in 2016 for testing positive for the use of GHRP-6, something that was later attributed to the use of his skincare cream to treat his Psoriasis. He would be out of action until 2018.

Mendes competed for the title on numerous occasions whilst within the UFC just falling short of claiming it. Having had a war with Jose Aldo, Mendes would lose via decision in their rematch despite earning a Performance of The Night Bonus. His second attempt would come on short notice against Conor McGregor after Jose Aldo was forced to pull out due to injury, however, Mendes would be stopped in the second round.

On his return from his suspension, he was tasked with taking on the now champion in Alexander Volkanovski, despite landing a knockdown of his own Volkanovski was able to put Mendes away in the second round.

Following this defeat, Chad Mendes would retire from the sport. He would return to combat sports last August having signed a multi-fight deal with BKFC.

How successful will Chad Mendes be in BKFC?