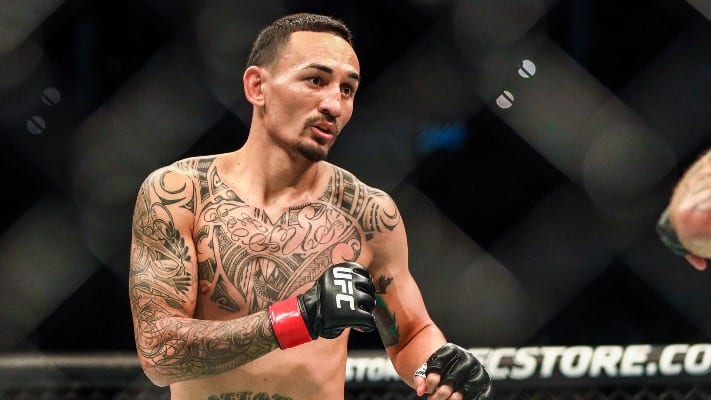 Max Holloway trained as much as he possibly could amid the ongoing COVID-19 pandemic.

Holloway will look to regain his featherweight title when he faces Alexander Volkanovski in a rematch in the new UFC 251 headliner on July 11 on Abu Dhabi’s Fight Island.

Holloway Had No Training Partners

However, he won’t be at his optimum best.

That’s because of the restrictions he had to face due to Hawaii’s strict stay-at-home orders during the pandemic. That involved having to be coached through Zoom calls as well as no training partners to spar with in his fight camp.

In fact, “Blessed” only met his coaches in-person for the first time in months on Friday when they met up in Las Vegas before the UFC’s chartered flight took them to Abu Dhabi.

Despite the less than ideal camp, Holloway realized he was putting too much effort in previous camps and actually enjoyed having one without sparring.

“Everything we were doing was through Zoom,” Holloway told Ariel Helwani on Friday. “If you got caught at the gym because there was a lockdown and stuff, we could all get arrested. It was a little bit more of a sacrifice on my end. If I went there, they see my butt out there, they’ll be like, ‘yeah, let’s get this guy,’ make a point and put fear into other people. We did it smart, did what we could. I stayed home, did a bunch of training at home.

“… Solo [no training partners]. … No sparring at all. I actually kind of like it. First time not sparring. I was a big believer in sparring. … This camp actually opened my eyes like man, I don’t even have to spar that much even more. I’m at a point in my career where I know how to punch, I know how to kick, I know how to apply it so I sparred.”

Volkanovski, however, isn’t buying it.

“To be quite honest, I don’t believe that,” the Aussie told ESPN. “That’s all s—. Whether he’s doing it to cover things on his end — I don’t want to accuse him of anything — but we had to get exemptions to train, so I couldn’t train until I got that done. So there was a lot that needed to happen for the government.

“Again, I’m not going to accuse him of anything, but I don’t believe that he hasn’t been training. I’m preparing for a fully prepared Max either way.”

Regardless, we will all get to see what the results of Holloway’s camp will be in a week.

What do you make of Holloway’s less than ideal fight camp?