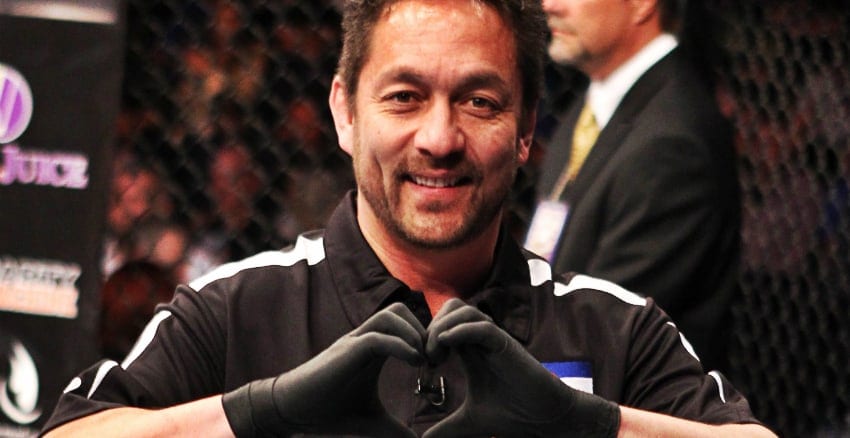 Mario Yamasaki could be back refereeing again in 2021.

The longtime MMA referee hasn’t refereed a UFC event since UFC Belem back in February 2018. While he has appeared for other promotions in Brazil as well as the PFL, he stopped entirely due to the COVID-19 pandemic.

That will change soon as he hopes to return to the gig later this year. But don’t expect him to feature in any UFC events.

“I’m waiting for the pandemic to be over so I start applying to the athletic commissions again,” Yamasaki told MMA Fighting.

“… I’ll go back to refereeing as soon as possible. Maybe not in the UFC, but Bellator, PFL, Shooto, other promotions, so I can be in the sport. It will be up to the athletic commissions to accept me back and license me and start giving me fights to referee.”

Yamasaki notably came under fire at UFC Belem for not stopping the women’s flyweight fight between Valentina Shevchenko and Priscila Cachoeira sooner as the latter was receiving a number of huge ground and pound strikes from the former during the contest. She was eventually submitted by Shevchenko in the second round.

UFC president Dana White even ripped into him following the event by calling him incompetent and hoped he would never step foot inside the Octagon again.

That has been the case so far and it looks like staying that way. However, Yamasaki has no hard feelings towards White despite the latter taking issue with him on several other occasions.

“The UFC has given me everything I have in terms of exposure, travels and all my knowledge,” Yamasaki added. “I lived through the pinnacle of MMA, the golden era. Only joy. I have nothing to complain, only to thank. Twenty years there, it’s not for everyone.”

Do you think we’ll ever see Yamasaki refereeing a UFC bout?