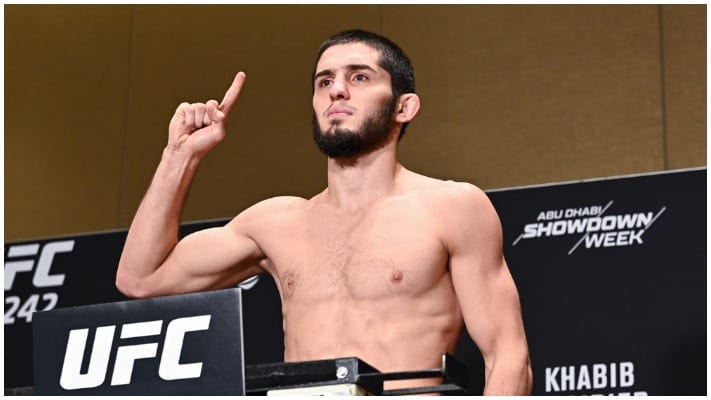 Islam Makhachev believes he is more than ready for a title shot.

Makhachev made short work of Dan Hooker as he quickly submitted him with a kimura lock in the first round of their lightweight contest at UFC 267 last night.

The nature of the win as well as the fact that he is now on a nine-fight winning streak gives Makhachev more than a good case of getting the next title shot.

He certainly feels that way.

“I feel good because I show my level – I don’t know how many minutes (it took),” Makhachev said at the UFC 267 post-fight news conference (via MMA Junkie). “Now everybody going to talk like Hooker is an easy opponent, he don’t have grappling or wrestling. Hooker is tough. He beat a lot of wrestling, grappling guy took. He beat Gilbert Burns, many guys.

“I think I deserve now. When (Michael) Chandler beat Hooker they give him title fight. Why not (me)? I am ready, too. I’m here not to beat 15 people and fight. I have nine fights (in a row now).”

Of course, it’s not set in stone.

Justin Gaethje battles Michael Chandler at UFC 268 next week and an emphatic victory for either could earn themselves the next crack at the title.

However, Makhachev still feels he has done more than enough to face the winner of the upcoming lightweight title fight between current champion Charles Oliveira and Dustin Poirier at UFC 269 on December 11.

Should he get the opportunity, Makhachev also expects to be facing Poirier next.

“I think Poirier is gonna beat Oliveira,” Makhachev added. “Many things going to change in next couple months. That’s why I’m going to wait.”

Do you agree with Islam Makhachev?