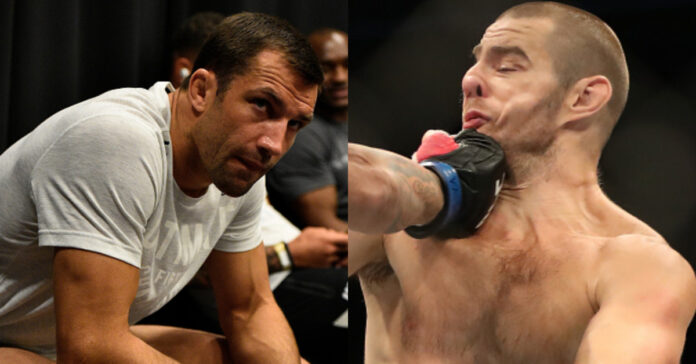 While speaking to Submission Radio about his own return to the Octagon, Rockhold discussed Sean Strickland’s bout with Pereira and believes the ever-controversial middleweight lost the bout mentally which lead to his first-round knockout.

“I think he got conned by the system,” Rockhold said. “Sean, he just proved how f*cking dumb he is. The system wanted him to try and stand with him and prove that stupid point, and he just [fell for it]. It happens. It happens to a lot of people. You try to over-prove yourself and do something stupid. That’s the game, that’s the fight game. It’s a mental f*cking battle, and he lost the battle.”

Rockhold was scheduled to face Sean Strickland at UFC 268 in November 2021, but the bout fell through when Rockhold was forced to withdraw due to injury. Now the former UFC and Strikeforce champion will make his long-awaited return at At UFC 278 on August 20th in Salt Lake City. There, he faces one-time UFC title challenger Paulo Costa.

With Pereira’s big win over Strickland, he finds himself sitting in the No. 6 spot in the middleweight rankings and is likely the next in line for a shot at Israel Adesanya‘s middleweight crown.

Pereira and Adesanya are very familiar with one another. Competing twice under the Glory kickboxing banner, ‘Poatan’ defeated ‘The Last Stylebender’ twice including a brutal knockout at Glory of Heroes 15 in 2017.

“Yeah, it’s an intriguing story, Alex Pereira has beat ‘Izzy’ twice,” Rockhold said. “And so you’re looking at any level of intrigue, and so they’re looking for someone that they can throw in the mix, even though Alex Pereira would get mauled by, 20 guys in the UFC would probably maul him. But yeah, it’s a compelling story Israel Adesanya if you get him past a brawler like Sean Strickland. So, they did it, and it’s up and going. So, it’s my job to go f*cking deter that.”