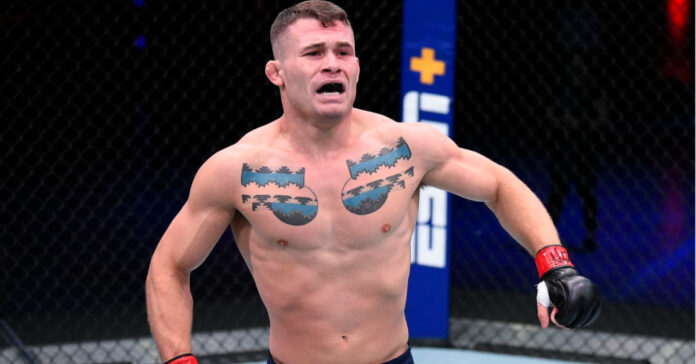 Louis Cosce will step inside the octagon for the first time in nearly two years when he takes on dangerous opponent Trevin Giles at UFC Fight Night: Sandhagen Vs. Song.

The 27-year-old was last seen in action at UFC 255 where he lost his promotional debut at the hands of Sasha Palatnikov. Cosce was then scheduled to return to face Preston Parsons in April of this year but had to withdraw from the matchup after catching COVID-19. Cosce spoke to LowKickMMA on the impact of contracting the virus and how the delay in his return to the cage affected him.

“It was stupid. Literally, the first time I had caught it and it kicked my a** pretty good. I didn’t know what the hell it was I was like f*** I feel a bit sick, and I was running a fever. I had a COVID test laying around and yep it was f***** stupid.”

“I was bummed out you know but I didn’t want to just sit there and cry about it you know, if God has this in store, then I guess it’s in store I’ll be back sooner than later. I wanted to be back in august but as soon as I got offered the fight, I was like yes, I will take it.”

A 17-month hiatus quickly turned 22 as he was forced to withdraw from his matchup due to illness. Despite having to overcome such adversity, Cosce was not deterred in the slightest having already had the experience of overcoming long absences whilst competing in the early stages of his career.

When asked if he would be concerned about ring-rust having spent so much time away Cosce was not even phased by the thought of it, the sense of relief to be able to compete back inside the octagon was simply all that was on his mind.

“Not too much I’m still young you know, I’m a little nervous but that’s just every fight you know. You still got to get in there and do the damn thing, the same thing happened earlier in my career too when I was 21 fighting at 55. Then for some reason like some huge hiatus you know life came along I was out for almost like two years and then I fought like 5 times in 4 months and then another long one because of covid you know so then I think that one was close to eight months, nine months and this one is longer, but I am just glad to be back in there.”

Having waited this long to return he simply would have accepted any fight offer put in his way and Trevin Giles is no easy task for anyone as he drops down to the welterweight division. Whilst Cosce’s opponent cuts weight to compete in a new division, ‘The Monster’ feels doing the exact opposite is what may be an influencing factor for him in this matchup.

I think some of these guys when they lose in a higher division they drop down thinking it’s going to be better but it’s like you’re kind of dehydrating yourself you know. I don’t really cut too much weight for 170 honestly, I was cutting a lot of weight for 55 when I first started and then I bumped up and I feel a lot better like a lot more hydrated, a lot more fresh.

I think I am the younger guy, I’m pretty confident everywhere honestly man I feel like he has good boxing you know, he has good power. The wrestling I feel like I have the grappling I know he’s a brown belt but you know we’ll see.”

It seems Louis Cosce is feeling supreme confidence ahead of making his return, and when asked how he sees himself getting his hand raised come fight night, the American just needed one word to clarify it all.

Tune in on September 17th to see how Louis Cosce fairs after nearly two years away from the octagon.

How do you predict Louis Cosce vs. Trevin Giles playing out come UFC Fight Night: Sandhagen vs. Song?