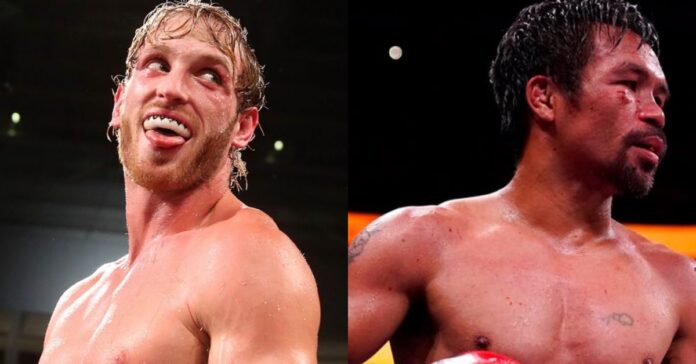 YouTuber and podcast host, turned professional wrestler and boxer, Logan Paul, has claimed he turned down an offer to face former eight-division world boxing champion, Manny Pacquaio in a return to the squared circle – as he prefers to focus on his professional wrestling career.

Paul, who competed against former world champion and past foe of Pacquiao, Floyd Mayweather in an exhibition boxing match last year, has featured just once professionally – suffering a decision loss against recent winner, KSI.

The Ohio native, the elder brother of outspoken professional boxer, Jake Paul, has been linked with numerous fights to return him to active competition, particularly, a 2023 showdown against Bellator MMA welterweight and grappling talent, Dillion Danis.

However, Logan Paul, who has also been linked to a fight against controversial former kickboxing champion, Andrew Tate, claimed he had received an offer to box the veteran, Pacquiao – which he ultimately decided to turn down.

“It was on the table,” Logan Paul said of a fight with Manny Pacquiao during an interview with Fight Hub TV. “On the table, like, ‘Do you want this fight (with Manny Pacquiao)?’ I said, ‘No’, because I will not be the guy that just fights retired boxers. I did that once, now I’m going to fight a wrestler in his prime, let’s see what happens.”

Featuring under the WWE (World Wrestling Entertainment) banner since last year, Paul is expected to face champion, Roman Reigns at a WWE Crown Jewel pay-per-view event on November 5. from the Mrsool Park in Riyadh, Saudi Arabia.

As for Pacquaio, the former eight-division world champion last featured atop an August card against Cuban puncher, Yordenis Ugas, suffering a unanimous decision loss in a WBA super welterweight title offing over the course of 12 rounds in Las Vegas, Nevada.