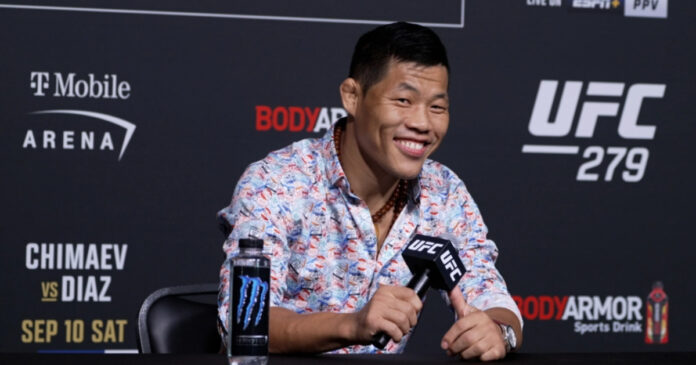 UFC welterweight Li Jingliang describes the scene backstage at the UFC 279 press conference that forced the event to be canceled.

During the UFC 279 fight week, the UFC made an unprecedented call and canceled the pre-fight press conference. An altercation broke out between Khamzat Chimaev and Kevin Holland backstage, but this quickly turned into something bigger as Nate Diaz and his team got involved with people from all sides playing a part in the chaos.

One man who wasn’t involved was Li Jingliang. ‘The Leech,’ who was dressed to the nine for the occasion, was told as he was due to walk on stage that the event had been canceled. Jingliang was still due to fight Tony Ferguson at this point before the top three fights on the card were all shifted.

When the incident occurred, there were many questions surrounding what actually took place and with there being little footage, there still is some confusion.

When talking to Ariel Helwani, Jingliang revealed what actually happened, having a front row seat.

“And then Khamzat just went backwards and came back with a kick at Holland, and so then they threw punches and kicks to each other,” Jingliang continued. “So everybody was shocked. And then I just grabbed Khamzat, I held Khamzat and I separated them and I told Khamzat, ‘Not today. Not today, bro. Not today.’ So it’s complete chaos there. Then everybody comes — the securities, even [UFC president] Dana [White]. We just separated these two, but they were still shouting at each other.”

“I can’t remember how many people, maybe 10 or more. And then he just shout something to Khamzat, and then I saw a water bottle thrown by Nate to Khamzat. And Khamzat dodged the bottle. Nate brought a lot of people to the press conference. So, when I was ready to get on the stage, they just told me, ‘Ok, we’re cancelling the whole event’.” (H/T BloodyElbow)

The Nevada State Athletic commission recently announced that they would be investigating the incident with punishments potentially following.

What did you think of Li Jingliang’s performance?