LowKickMMA.com
Home UFC News Derrick Lewis Still Has ‘Hunger’ In Him After Title Loss To Daniel... 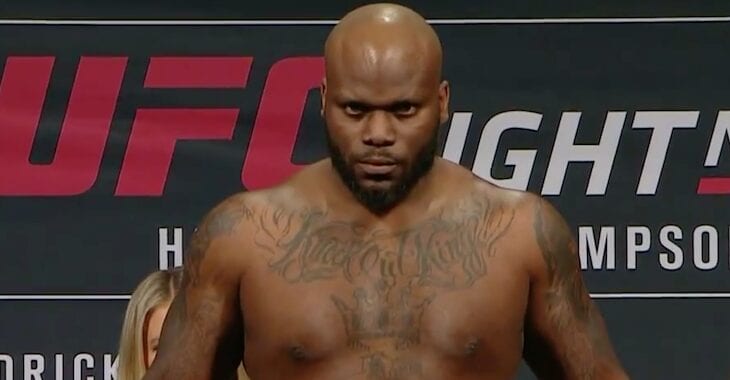 Derrick Lewis is coming off the first UFC heavyweight title opportunity of his career.

Lewis met Daniel Cormier in the main event of UFC 230 in November. The bout took place from “The World’s Most Famous Arena,” Madison Square Garden. Unfortunately for “The Black Beast,” he was submitted in the second round via rear-naked choke. It marked the end of a three-fight win streak for the 33-year-old.

Now, with a new UFC contract recently signed, Lewis will be making his return to the Octagon. He’s set to face former UFC heavyweight champion Junior dos Santos at UFC on ESPN+ 4. The show goes down from the Intrust Bank Arena in Wichita, Kansas on March 9th. Recently, Lewis spoke to MMAjunkie about the upcoming match-up.

Despite his recent title loss to Cormier, Lewis says he still has the “hunger” inside him to be great:

“I’m feeling good about this fight, too, and I’m real happy about my contract that I just signed,” Lewis said. “And so everything is looking up. Even though I’m coming off a loss, I’m happy, I’m satisfied, and I still got that hunger in me.”

If he wants to get back to the UFC heavyweight title, Lewis will have to start by defeating a former champion in “JDS.” Dos Santos is currently on a two-fight win streak. His most recent victory came against Tai Tuivasa in the second round of their fight at UFC Fight Night 142 in December.

Given the odd situation at heavyweight, it’s very possible the winner of this fight receives the next shot at the championship. Daniel Cormier could very well retire soon, or decide to jump back down to light heavyweight and fight Jon Jones. This isn’t something Lewis has paid too much mind to, but if it happens, he’s ready: