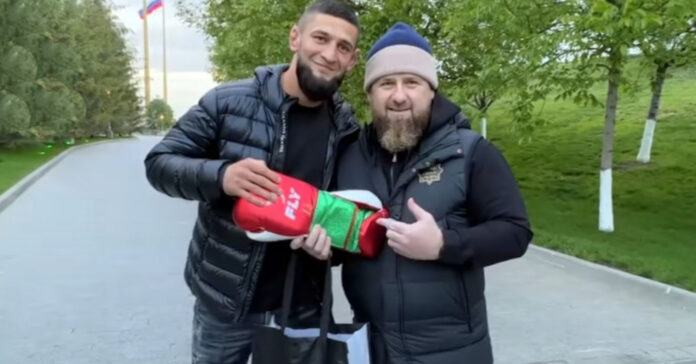 Chimaev, who is a close friend of Chechen dictator, Kadyrov, has been a prominent figure in the controversial figures inner circle since his tenure in the UFC began – with the dominant grappler even sharing footage of himself grappling and training with the 45-year-old earlier this year. Kadyrov also purchased Khamzat Chimaev a Mercedes SUV following an earlier victory inside the Octagon, which Chimaev ultimately crashed.

Kadyrov, a close friend and ally of Russian president, Vladimir Putin, is potentially facing sanctions from the US treasury, currently. And has also been accused in the past of leading LGBTQ+ purges in the state of Chechnya during his time as republican leader, as well as allegedly orchestrating torture, executions, as well as forced disappearances, and a slew of countless human-rights abuses.

Co-headlining UFC 279 last weekend after he was demoted from a main event clash with Nate Diaz following a massive seven-and-a-half pound weight miss, Khamzat Chimaev submitted Californian striker, Holland in the opening round.

Faking a glove touch against Holland during the opening exchange, Chimaev quickly took Holland to the ground via a body lock, before eventually latching onto a D’Arce choke, scoring his sixth victory under the UFC banner following a prior judging win against Gilbert Burns back in April of this year.

Despite receiving mass criticizm following his weight miss and controversial fight week antics by and large, Chimaev was congratulated on his victory over Holland by the above mentioned, Kadyrov, who posted the message “Akhmat Sila” on his Instagram account, which translates to “Akhmat Power’ – a message commonly used by the republican leader.

“(Khamzat) Chimaev absolutely does not worry about his weight, but he does not stand on ceremony with other categories either,” Ramzan Kadyrov posted. “He just goes out, wins, dictates his conditions in the Octagon and puts things in order.” (H/T Bloody Elbow)

Notably, Chimaev, who tested positive for COVID-19 ahead of a December 2020 fight against current welterweight champion, Leon Edwards, confirmed his intentions to retire from professional mixed martial arts as he delt with numerous health issues due to his coronavirus diagnosis, before Kadyrov confirmed how he had pursued the AllStars trainee to continue his career.