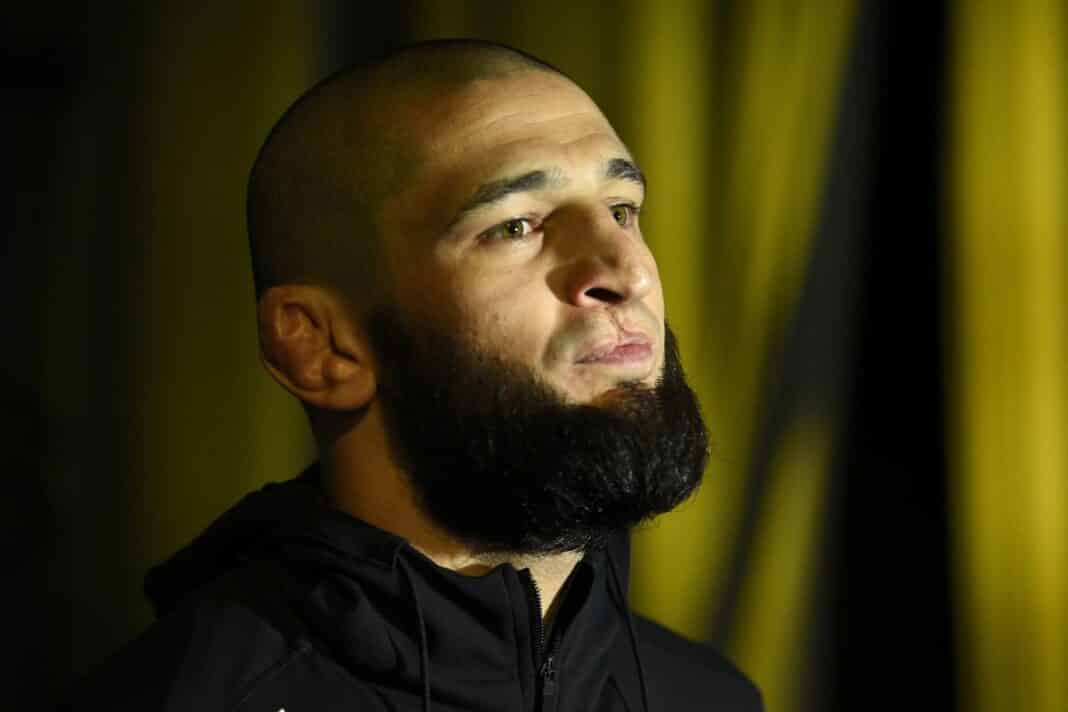 Khamzat Chimaev has blamed the media for creating a non-existent beef between him and the former UFC lightweight champion, Khabib Nurmagomedov.

‘The Wolf’ has been out of the Octagon for more than a year dealing with complications from catching COVID-19. During his time away from fighting, Chiamev appeared to take shots at his fellow Russian, Nurmagomedov.

It all started in May when Chechen leader Ramzan Kadyrov held an Instagram Live session and jabbed at Nurmagomedov for not wanting to appear under both the Russian and Dagestani flags.

Chimaev commented during the session that he would “smash” Nurmagomedov if he ever wanted to face him in the octagon and come out of retirement.

‘The Eagle’ attempted to downplay the comments made by Chiamev when he spoke to Russian media later that month.

“You’re only disappointed in someone when you expect a certain type of response from them,” Nurmagomedov said. “I never expected anything from this person. It’s his right, if he thinks what he said was necessary, let him write what he wants. Those questions are for him”

“Every person has their own opinion, so let it be. I did not watch the live broadcast of Ramzan Kadyrov, I just read what you [media] write. How did I feel? Nothing. The whole world is discussing me.”

In August, Chimaev claimed that his comment had been taken out of context.

“I answered to bullsh*t guy (during the Q&A), but nobody knows him,” Chimaev said. “It’s my [mistake) because I answer for him. He said like, ‘Khabib gonna smash you…’ If somebody say (sic) to you, ‘He gonna smash you,’ of course I’m gonna answer it like, ‘No, nobody gonna smash me. I’m gonna smash everybody. If you a (sic) real man, you have to think like that.”

Khamzat Chimaev Claims The Media Fabricated Beef Between Him & Khabib

Ahead of his return to action against Li Jingliang at UFC 267 this weekend, Chimaev again tried to downplay the perceived beef between him and Nurmagomedov by calling it a creation of the media.

“What happened with Khabib and with me? I didn’t talk with Khabib. How can I misunderstand something? People said, people, media take it this way (writing) bullsh*t things. Some guy writes to me some bullsh*t, I answered,” Chimaev told BT Sport. “It was not Khabib. Nothing happened. I didn’t talk with Khabib, he didn’t talk with me. I don’t know this guy. He doesn’t know me and everything is normal. He is Muslim. I am Muslim. We are brothers. And, if you have some problem, welcome.”

Do you think the beef between Khamzat Chiamev and Khabib Nurmagomedov was a media creation?