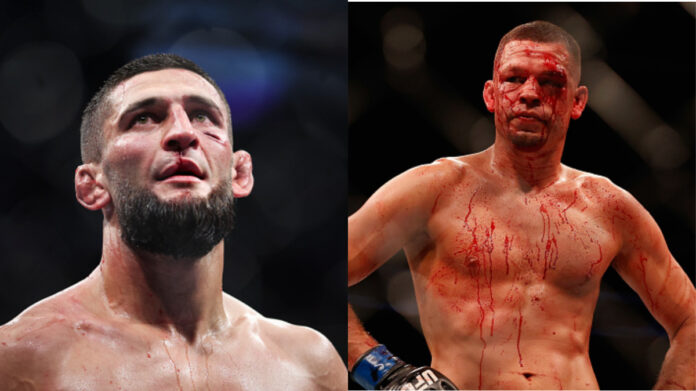 Two of MMA’s biggest superstars are feuding and in the latest verbal conflict, Khamzat Chimaev has fired back after Nate Diaz took to Twitter with claims that ‘Borz’ wasn’t a real fighter, as Chimaev was taking too long to fight him.

“I been trying to fight for a year and months now,” Nate Diaz said on Twitter. “I also tried to fight Khamzat for the last month and a half but he was hurt, had visa issues, overweight and now his b*tcha** is off getting married instead of fighting wtf? I’m tryin to get a fight wit a real fighter asap/July.”

In another tweet, Diaz would also say: “UFC Wass good wit a fight in July is the whole roster scared or what?”

Not afraid to respond, Khamzat Chimaev made sure to let his thoughts be known, firing back at Nate Diaz.

“You are funny, are you high? It seems like you’ve been smoking,” the Chechen-born Swede would respond.

Soon after this reply to Diaz, ‘Borz’ would set his sights on a different foe, Colby Covington. Rumors of the two supposedly fighting have been floating around the MMA world for a month or so now, but it’s looking like things are starting to heat up.

According to Chimaev, Diaz has turned down the opportunity to fight him at least 10 times. A fight against Covington could be exactly what ‘Borz’ needs to separate himself from the pack, and finally earn a shot at the champion Kamaru Usman‘s welterweight supremacy.

Khamzat Chimaev (11-0, 5-0 UFC) made an impact as soon as he entered the UFC. Setting modern-day records for his activity when he fought three times in a little over a month’s time. With his closest fights coming within a mere 10 days of each other.

His latest fight against Gilbert Burns was the most human we’ve seen ‘Borz’ look inside the octagon, as typically so far he had demolished his competition; barely taking a punch in the process.

The Burns fight was a war and received high praise for its intensity. Now, Chimaev seems very eager to get back into the cage and do some damage.

Who would you like to see ‘Borz’ fight next, and what are your thoughts on his beef with Nate Diaz?