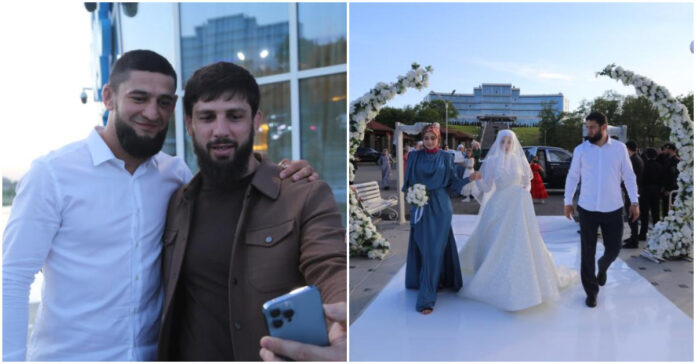 Rising UFC prospect Khamzat Chimaev has reportedly gotten married over the weekend in his hometown of Chechnya.

Without a hint of indication prior to the event, Khamzat Chimaev has now seemingly become a married man after a video of him in a ceremony with his wife, friends, and family appeared on social media. In what looks to be his hometown of Chechnya, Chimaev was surrounded by his close ones and Ramzan Kadyrov, the Head of the Chechen Republic.

In a video uploaded on his Instagram, the infamous Kadyrov shared the news of the UFC welterweight’s wedding with a montage video from some of the celebrations.

Khamzat Chimaev has risen to the top of athletes hailing from the war-torn region of Chechnya. Given his current standing with the community, it should come as no surprise that ‘Borz’ was afforded special arrangements for the occasion. A police escort to the hosting venue can be seen transporting guests in the video.

While the announcement of his wedding wasn’t as conspicuous, a rough translation of the attached post confirms that it was indeed Chimaev who made the walk down the aisle.

Making his way into the UFC in July 2020, Khamzat Chimaev got off to a solid start with a second-round submission victory over John Philips. Chimaev would continue to improve his performance in his next three outings as he dispatched each opponent within the first round of the bouts.

‘Borz’ kicked things off in the UFC with a seemingly invincible run of fights that saw him absorb only a single strike, which too was a result of self-defense on the ground by an opponent he was looking to submit.

This past April, Chimaev collided against Gilbert Burns in his toughest test so far. In a close-fought battle, the 28-year-old Chechen came out on top with the first decision win of his career. He had maintained a 100 percent finish rate in his first ten fights.

Chimaev has called for a shot at the title against the champion Kamaru Usman. However, a fight between the two looks unlikely anytime soon as the pound-for-pound king recovers from the damage to his hand. The young ‘Borz’ has also expressed interest in taking on Colby Covington but no further developments have been announced yet.