LowKickMMA.com
Home UFC News Khabib Nurmagomedov Showers Support For Cain Velasquez: “You Have To Protect Your... 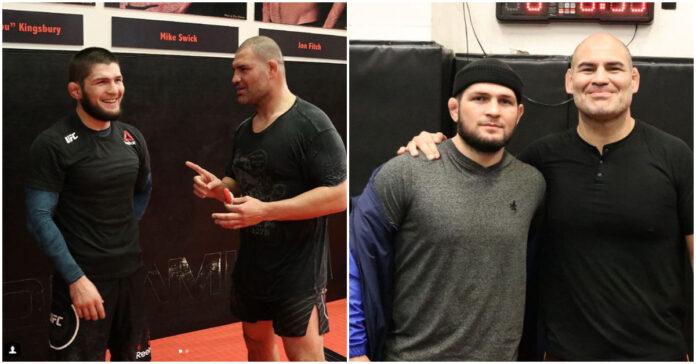 Towards the end of February, Cain Velasquez was arrested for attempted murder after he allegedly shot at a man accused of molesting a young relative of the former UFC heavyweight champion. Velasquez has stayed behind bars and was denied bail on two occasions, last week and initially at the time of his arrest.

MMA community has rallied its efforts behind Velasquez with the #FreeCain movement. The presence of his supporters including UFC president Dana White, Daniel Cormier, coach Javier Mendez, and others has been evident throughout the trial proceedings, in and outside the courtroom.

In an interview with TMZ Sports, Khabib Nurmagomedov showered his support for his former training partner. The pair used to train together at American Kickboxing Academy in San Jose, California during their fighting days.

“Yesterday, I was talking with coach. I tell him any chance or is it possible to go and see him in jail? In Russia, we can go and see anybody like I asked him because I don’t know the law here in the U.S. I really wanna go to see him,” Khabib said. “After a couple of days, I’m gonna be in San Jose. I wanna go to see him, shake his hand, give him good energy.”

“Anybody in the world who respects himself, who loves his family — he’s gonna do same thing,” Khabib added. “C’mon, nobody gonna think about law or something when you have something about your family. You have to protect your family.”

‘The Eagle’ shared his disappointment at the outcome of the situation with Velasquez in jail and the accused molester roaming freely.

“This is not fair to sit in jail and other guy, he’s outside. What about other guy? Put this guy in jail, too! He’s more dangerous for people than Cain Velasquez.”

As someone who’s spent a large chunk of his time together at the gym, Khabib likely has a good idea of Velasquez as a person, and he also spoke about the experience.

“Never in his life, he’s 40-years-old, never in his life did he have a problem in social, you know, outside with people. He’s the most respectful guy I’ve ever seen in my life. I was training with him more than 10 years, I know his family, everybody.”

If found guilty, Velasquez could be looking at a sentence of 15 years and up to life in prison. He may get additional time if found guilty of the additional felony charges.