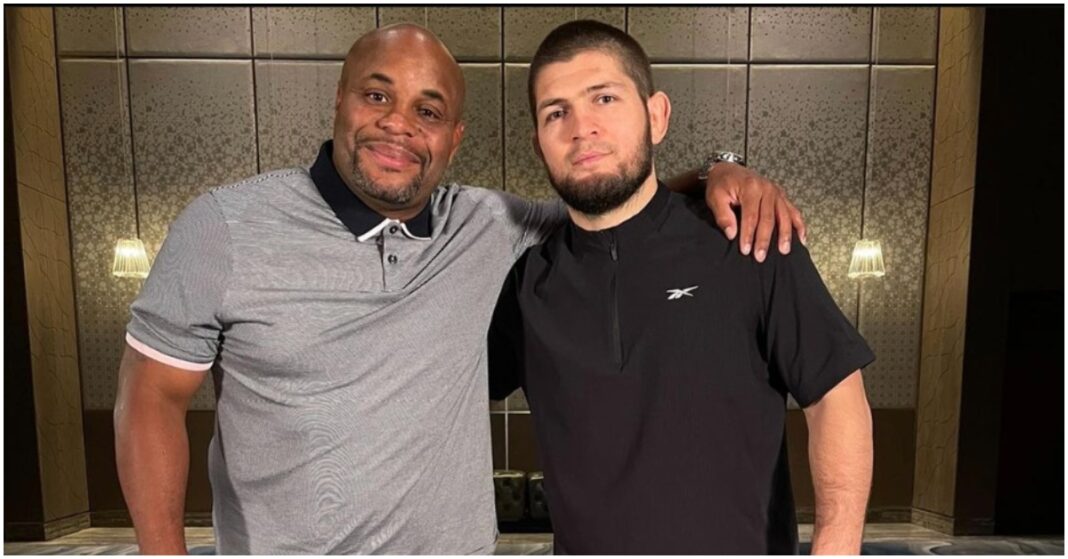 Former UFC lightweight champion Khabib Nurmagomedov has paid tribute to his long-time friend and teammate, Daniel Cormier after it was announced he would be inducted into the UFC hall of Fame.

Emotions ran high in Arizona last Saturday, as former two-division UFC champion Cormier was met with a surprise announcement. During the UFC 274 broadcast, it was announced that he would be inducted into the Modern Wing of the UFC Hall of Fame, as part of the 2022 class.

There was no doubt when Cormier decided to hang up the gloves in 2020 that he would at some point be in the hall of fame. ‘DC’ won the UFC light-heavyweight and heavyweight titles along with the Strikeforce Heavyweight Grand Prix Championship during his career.

The American has produced some legendary moments in the cage and has defeated the likes of Anderson Silva, Alexander Gustafsson, Anthony Johnson, Stipe Miocic and Dan Henderson.

Cormier has made a seamless transition from fighter to broadcast team, and is now one of the UFC’s most beloved commentators. ‘DC,’ alongside Joe Rogan and Jon Anik, have produced some of the most memorable commentary moments in UFC history.

Alongside Cormier, Nurmagomedov is also set to be inducted into the hall of fame. The pair share a close friendship, bonded by the time spent together on the mats at the American Kickboxing Academy in San Jose, California.

‘The Eagle’ would take to his Instagram to share a photo of he and Cormier with a touching message.

“It was a great honor for me to train almost 10 years shoulder to shoulder with you, I learned a lot from you,” Wrote Nurmagomedov. “It’s unbelievable that we both got into the UFC hall of fame in 2022. You deserve everything you have Champion. Your hard work, dedication and loyalty to your loved ones brought the results. You are one of the best who was ever in this game.”

How do you feel about ‘DC’ being inducted into the hall of fame?