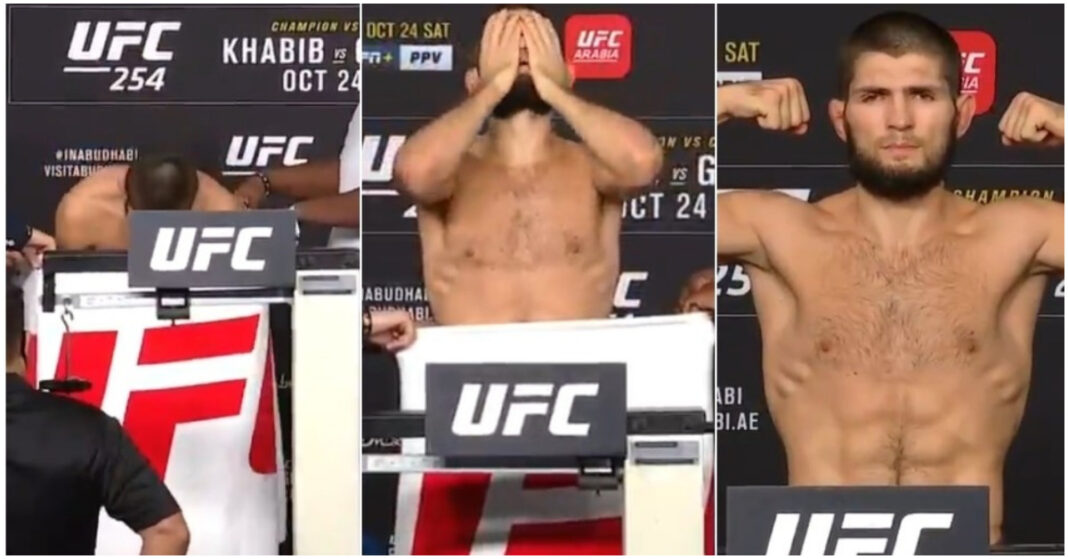 An old video of former UFC lightweight champion Khabib Nurmagomedov weighing in has been doing rounds on the internet after Charles Oliveira missed weight for UFC 274.

This past Friday, Charles Oliveira added another record to his resume when he missed weight for his upcoming bout with Justin Gaethje. The most decorated submission artist of the UFC now has the unfortunate honors of being the first champion to be stripped of his belt due to not making weight.

Another notable champion who looked debilitated during the weigh-ins was the undefeated Khabib Nurmagomedov. Before his retirement fight against the same opponent, Khabib was declared to have made weight under dubious circumstances.

Despite the many progressions made in the sport, cutting weight to ghastly proportions has managed to stay around. Khabib Nurmagomedov being allowed to compete against Gaethje when he looked to step over the division limit is not a sole incident. In the case of the Dagestani fighter, the scale can be clearly seen moving up before the official weigh-in is announced.

Ahead of his bout with Li Jingliang at UFC 267, Khamzat Chimaev pushed through a tough weight cut. He missed weight on the first attempt and returned an hour later, only to strip down naked in order to lose some additional fluff. He appeared to step on the scale holding onto the towel which makes the reading invalid.

There has been a lot of controversy surrounding the accuracy of the scale used. In what’s being referred to as “scale-gate” now, some athletes complained of improper calibration of the equipment. ‘Do Bronx’ had tweeted that he made weight on the morning of the weigh-ins only to then officially miss the mark by half a pound.

Do you think Charles Oliveira is being treated too harshly?