LowKickMMA.com
Home UFC News Khabib Nurmagomedov has played down the idea of signing Luke Rockhold to... 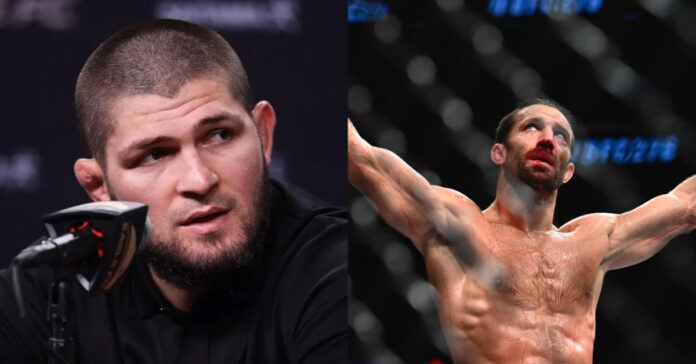 Khabib Nurmagomedov (29-0 MMA) has stated that he isn’t keen on bringing his former AKA teammate Luke Rockhold (16-6 MMA) to Eagle FC.

Nurmagomedov last competed in the UFC in March 2021 after defending his lightweight belt for a third successive time against Justin Gaethje (23-4 MMA) at UFC 254, exiting the sport with an unscathed 29-0 record.

‘The Eagle’ has since begun a new venture as an MMA Promoter.

Now as his own boss he now has the final say on how he wants his MMA promotion to be run and which fighters he would want to bring in.

The former middleweight champion Luke Rockhold has recently announced his retirement following his ‘Fight of the night’ loss to Paulo Costa (14-2 MMA) in the co-main event at UFC 278.

Rockhold announced his decision to walk away from the UFC during his post-fight interview with Joe Rogan.

Khabib Nurmagomedov is known for giving new homes to UFC retirees such as: Diego Sanchez and Kevin Lee. Especially considering the pair were close teammates at American Kickboxing Academy (AKA).

However, during an interview on ‘Red Corner MMA’, when asked about the idea of signing Luke Rockhold to Eagle FC he shut down that possibility.

“I don’t think so. (Rockhold) was a Strikeforce champion. He was a UFC champion,” Khabib stated.

“He has nothing to prove here, I believe he does not have to fight anymore.”

Prior to UFC 278, Rockhold hadn’t been back inside the Octagon for three years, in addition, he hadn’t been able to pick up a victory since a TKO win against David Branch (22-7 MMA) in 2017.

Should Khabib Nurmagomedov have another think about signing Luke Rockhold to Eagle FC?