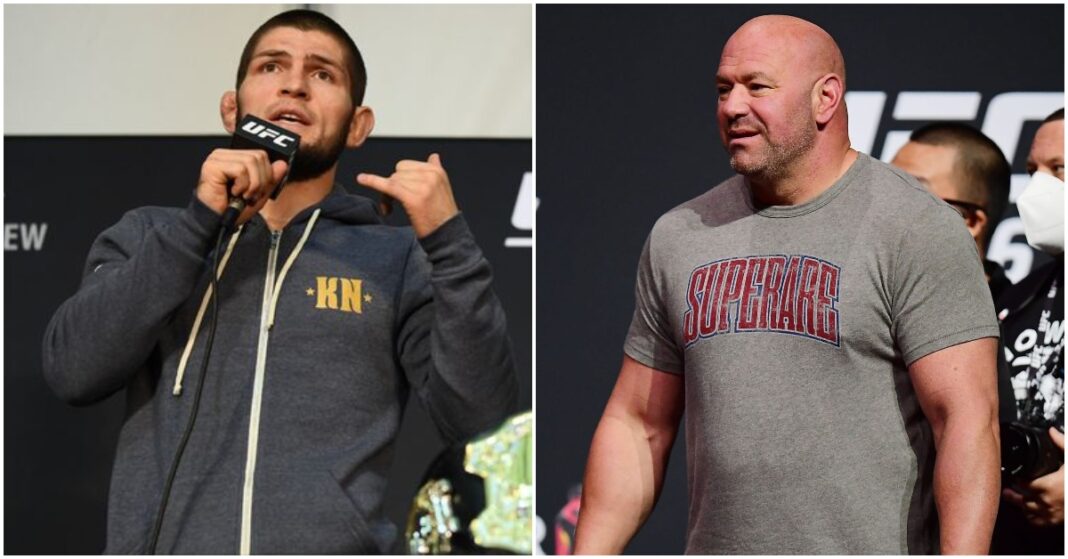 Khabib Nurmagomedov reveals that UFC President Dana white has been ignoring his texts after campaigning for Islam Makhachev to get a title shot.

Since Mahkachev’s disposal of Bobby Green in February, Khabib Nurmagomedov has been particularly vocal about his long-time friend and training partner getting a shot at UFC gold. Taking to interviews, social media posts, and comment sections, Nurmagomedov has been pushing at every opportunity to bolster Mahkachevs title shot claim.

But now, Nurmagomedov reveals that this effort has been falling on deaf ears, admitting that Dana White has ignored his texts asking to book Mahkachev against Charles Oliveira.

Honestly, this is first time since we started talking to each other that he don’t respond to me,”  Nurmagomedov told ESPN. “I send him message saying ‘No way someone else can fight for the title. Islam has to be there.’ He don’t respond, I think he busy, maybe. It’s OK. Everybody make mistake. He’s going to come back stronger.”

Khabib Nurmagomedov Is Confident In Makhachev Against Oliveira

‘The Eagle’ and those who surround him have never lacked confidence in their ability to fight and this time is no difference. Nurmagomedov reveals that they would be willing to go to Brazil to face Oliveira, who is currently riding an 11 fight win streak, and that Makhachev would beat him at his own game

“I hear they want to make a big show in Brazil in December,” Nurmagomedov said. “OK, December is good for Islam. They don’t want to go to Abu Dhabi? I hear Charles Oliveira’s coach say, ‘Come to Brazil.’ No problem. Send us location. We’ll go to Rio de Janeiro, São Paulo, no problem.

Oliveira, a 3rd degree BJJ black belt, holds the record for the most wins by submission in the UFC with 16, five more than the next best, but Nurmagmedov is confident that Islam can beat him at his own game

“We’re going to win the hearts of Brazilian fans. They’re going to love Islam’s ground game. We’ve grappled together all our lives and I see how Islam goes with a lot of ADCC level guys, even ADCC champions, they tap when they roll with Islam.

Do you agree with Khabib Nurmagomedov, does Mahkachev deserve a title shot?