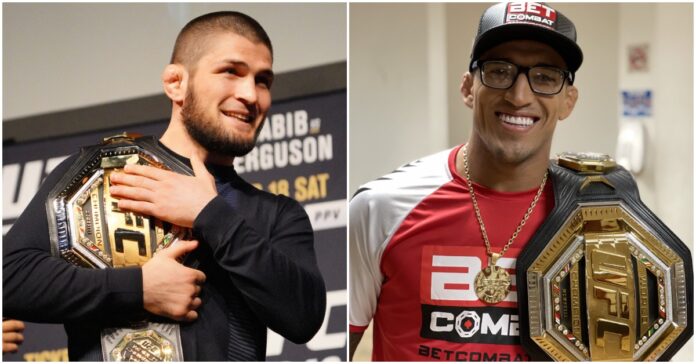 Former UFC lightweight titleholder Khabib Nurmagomedov has admitted that Charles Oliveira is the uncrowned champ at 155lbs right now, but he believes that ‘Do Bronx’ must overcome one more opponent before he can call himself “undisputed UFC lightweight champion.”

It will come as little surprise to most that the opponent Nurmagomedov is referencing here, is his close friend and teammate, Islam Makhachev. Boasting a record of 22-1, and riding an impressive 10-fight winning streak, Makhachev has as good a claim to the title as any other 155lb contender.

However, UFC President Dana White has stated that Makhachev must first overcome Beneil Dariush before getting a shot at the lightweight title.

In a recent interview with Brett Okamoto of ESPN MMA, Khabib Nurmagomedov laid out why he believes that Islam Makhachev should be next to fight Charles Oliveira for the vacant lightweight title. He stated that:

“If Charles wins, Islam will have to give him credit. Then he’s gonna be undisputed UFC lightweight champion. Right now, I believe he’s champion, I believe. People talk about half pound [missing weight], he deserves it. Right now in this moment, he deserves to be champion. He’s doing a very good job, but he’s not undisputed. When I finished, I was undisputed. I was undisputed. I fight with Conor, interim champ Dustin Poirier, interim champ Justin Gaethje, who just beat primetime Tony Ferguson. These guys were in a different time in a different prime, not like now when they fight Charles Oliveira. It was like one and a half, two years ago. That time when I finished, I was undisputed.”

Khabib went on to reiterate his point, by saying:

“Charles is champion, I agree with him. But, he’s not undisputed, brother. If he beats Islam of course I’m gonna feel bad, but people are gonna talk about oh Khabib can come back, please, leave me alone. Let these guys fight! This is different time.” (H/T BJPENN.COM).

Do you agree with Khabib’s comments here?