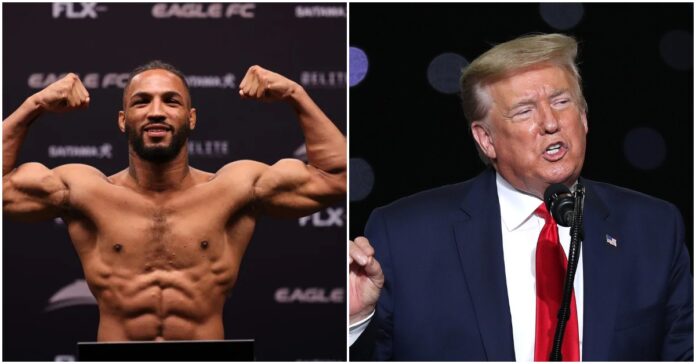 Kevin Lee has revealed he would like Donald Trump to pick the next opponent he will face in Eagle FC.

Following on from his unanimous decision victory over Diego Sanchez at Eagle FC 46 the former UFC fighter revealed he wants Trump to be involved when it comes to finding him his next challenge. Lee was able to secure the victory over Sanchez despite sustaining damage to his knee that he suffered within the first round.

Lee then caught viewers off guard during his post-fight interview in which he would reveal his interest in having Donald Trump involved.

“I hear Donald Trump is starting to get back into promoting,” Lee stated. “So, it would be fun if he picked the next opponent.”

Trump has had experience within the fight industry previously. The 45th U.S. President owned a large amount of equity stake in Affliction Entertainment who hosted multiple MMA events. Trump himself would appear at some of these events and promote them during the promotion short stay from 2008-2009.

If Lee is correct and Donald Trump is making a return to the MMA world, it will be interesting to see where he ends up at.

Kevin Lee was able to secure himself a successful debut victory over Diego Sanchez at Eagle FC 46 despite suffering an injury and it seems this victory has boosted ‘The Motown Phenom’s confidence by some way. Following on from his win Lee used his post-fight interview to stake his claim at a shot for the title.

“There’s no doubt, I’m the best 165er out here,” Lee stated. “The best guy for anyone who wants to weigh 165.” (Transcribed by Middleeasy.com)

Given the birth of the new 165lbs division it may not be long before Kevin Lee obtains the first chance to secure the Eagle FC super lightweight title and deliver on his promise of being the best.

Were you impressed with Kevin Lee’s performance at Eagle FC 46?