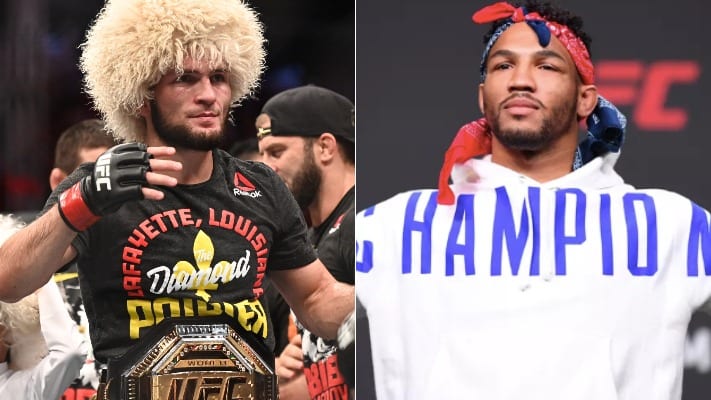 Kevin Lee has been gunning for a fight with Khabib Nurmagomedov for quite some time. Lee has struggled inside the Octagon as of late, and after a failed bid at welterweight, will drop back down to 155 pounds for UFC 244 in November.

Currently, Nurmagomedov runs the lightweight division, sitting atop the 155-pound mountain as champion. He comes off of a successful title defense over Dustin Poirier via third-round submission at UFC 242 in Abu Dhabi. Before that fight, Lee would’ve said he was 90 percent sure former interim champion Tony Ferguson would beat “The Eagle.”

But now, after seeing how the Russian handled Poirier, Lee tells MMA Junkie he has changed his tune.

“I got to be honest: If you asked me before the Poirier fight, I would have been like Tony (Ferguson) is still like a 90 percent chance of winning,” Lee said. “After seeing what Khabib did to Poirier, I think it’s going to be very hard for Tony to beat him.”

Currently, Ferguson has aligned himself as the undisputed next logical challenger for Nurmagomedov at this point. Lee agrees that the MMA community doesn’t want to see the Russian champion fight anybody else other than Ferguson. However, that’s the very reason he’s motivated to drop back down to lightweight and get people excited about a fight between himself and Nurmagomedov.

Going back to Nurmagomedov’s victory over Poirier, Lee was extremely impressed with the Abu Dhabi performance. And people know he’s not easily impressed.

“I’m not going to lie: It was very, very impressive, and the people know I don’t get impressed very easily, especially with a guy like Khabib, but that one is very impressive,” Lee said. “One of those fights that got me up even, it made me step my game up. Literally, as soon as that fight was over, I got in my car and started driving to Montreal. I know what type of work I got to put in now.”

What do you think about Lee’s comments on Nurmagomedov after his win over Poirier?