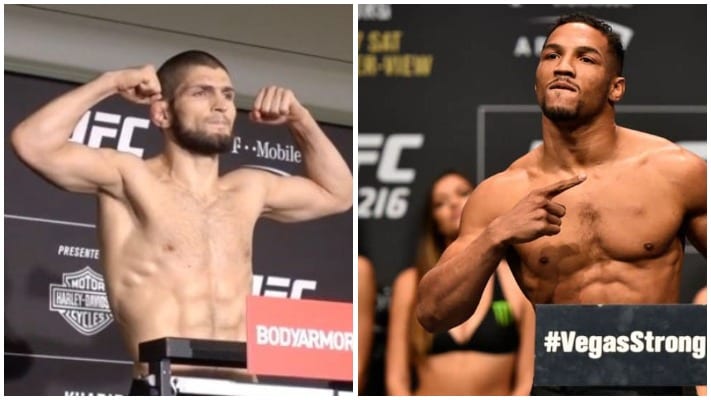 Kevin Lee may not have taken Khabib Nurmagomedov seriously in the past, but he certainly does now.

Nurmagomedov enjoyed a dominant victory over Dustin Poirier to retain his lightweight title at UFC 242 this past weekend. “The Eagle” even faced some adversity from Poirier but still managed to come away with the submission win.

Lee has wanted to fight Nurmagomedov in the past, and while he recently moved up to welterweight, he is open to moving back to 155 just to get a “piece” of the cake:

“I told them I will take whatever fight,” Lee told ESPN in a recent interview. “I’ll go back down to 155 if I need to. After looking at that last fight with Khabib — I did an interview before that fight, before Khabib fought Dustin, I wasn’t too impressed.

Lee had a failed welterweight debut when he was submitted by Rafael dos Anjos earlier this year. As of now, he’s not sure which division he’ll compete in next. But just basing it off who the biggest challenge is, the “Motown Phenom” wants to return to lightweight.

One reason is because he finally gets the hype around Nurmagomedov:

“I like the biggest target that I can find and right now everyone sees Khabib — I mean they already kind of saw it before — but now I’m even coming around to it,” he added. “He’s the real challenge out there. He’s the guy that’s going to challenge Jon Jones for the pound-for-pound title. That’s the kind of fight that wakes me up in the morning.”

Many see Lee as an ideal style matchup against Nurmagomedov. Do you agree?