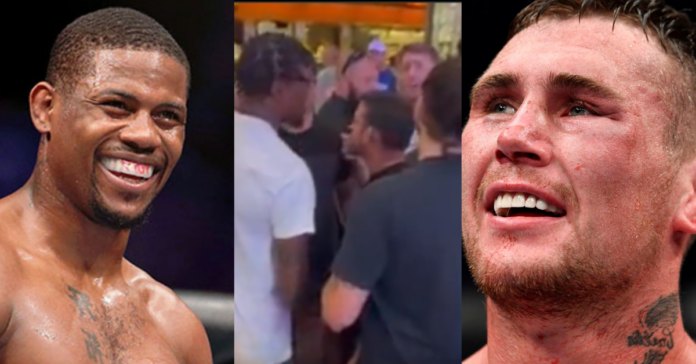 According to Ariel Helwani, Chimaev push-kicked Holland in the chest. He wrote on Twitter, “Khamzat Chimaev push kicked Holland in the chest. Chimaev was reacting to things Holland has said recently and it set him off, I’m told. Once that was broken up the Chimaev-Diaz part of the story popped off and then the bottles started flying.” After the press conference had been announced as canceled, these two fighters continued their argument in the lobby.

UFC fan Chris Owens shared the following footage on his Instagram, which was later shared by Aaron Bronster:

New Footage of Kevin Holland and Darren Till

The new footage shows the US-born Kevin Holland and Darren Till arguing in a lobby surrounded by their team. A training partner of ‘Borz‘ Till said “He can do what he wants!” To which Holland responded, “Well, then we can do what we want.” It is a continuous argument between Holland and the Englishman Till. Much of it is inaudible but appears to be involving a restaurant.

“Kevin, you’re fighting on Saturday night,” Till said attempting to defuse the matter. To which Holland responded, “It’s not about fighting, it’s about risk control … Tell these fools to enjoy their meal.” The argument was continuously interrupted by the fighters signing autographs and taking photos with fans.

On Saturday night at UFC 279, Holland will be facing Daniel Rodriguez. ‘D-Rod’ shows up at one point, laughs along with Holland and his team, hugs a fan, and walks away.

Darren Till has earned a record of 1-2 since moving up to middleweight in 2019. Due to injuries, he has not fought since late 2021. It is rumored that the English-born fighter will be facing Dricus du Plessis, who is 3-0 in the UFC, and UFC 282.

Khamzat Chimaev has been training with Darren Till to get ready for his UFC 279 main event fight against Nate Diaz. This will be the Russian’s first five-round fight in the UFC and will likely be Diaz’s last bout in the organization.