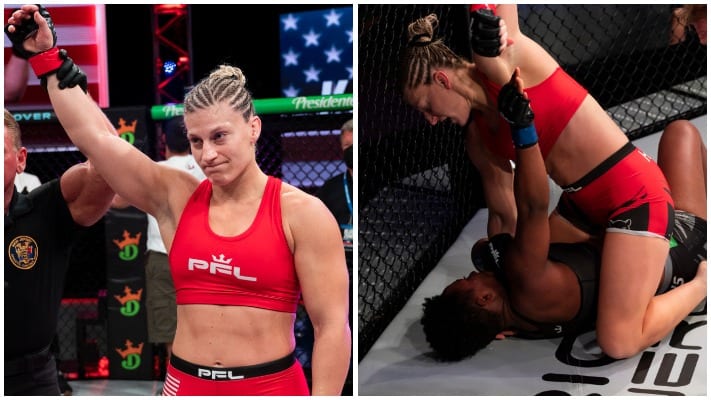 Kayla Harrison is not showing any signs of slowing down in her quest to regain PFL gold. The women’s lightweight champion started this season’s campaign with a devastating finish of Mariana Morais in her regular-season opener.

Harrison needed less than 90 seconds to show her division and the rest of the MMA world that she does not plan on giving up her title anytime soon. She threw a head kick as soon as the fight started and immediately overwhelmed Morais with her pressure. After a well-executed trip, Harrison went to work with her ground and pound until the stoppage.

Harrison scored a perfect 100 fighter performance rating and did not allow Morais to earn a single strike in the brief matchup. Following the fight, Harrison made it known what her intentions are for the remainder of this season. “This isn’t a tournament, it’s a coronation, and I’m the Queen,” Harrison commented in her post-fight interview.

Harrison walks away from her season opener with six points for her efforts. Her points place Harrison second in the current standings behind Larissa Pacheco. Fighting last night as well, Pacheco also had a spectacular TKO in less than a minute of the first round against Julija Pajic. Harrison and Pacheco faced off twice during Harrison’s 2019 campaign, with the champion winning both fights. Still, Pacheco is the only fighter in the PFL to take Harrison the distance both times they met.

If Harrison can keep the momentum, she seems poised to run through the division again. Winning another PFL title would undoubtedly raise the question of what would be next for the two-time Olympic Judo gold medalist. Many have speculated that a move to the UFC to face Amanda Nunes or to Bellator to face Cris Cyborg is the only logical next step. However, Harrison is singularly focused on one goal, repeating a PFL women’s lightweight championship.

Do you think Kayla Harrison will be the 2021 PFL women’s lightweight champion?