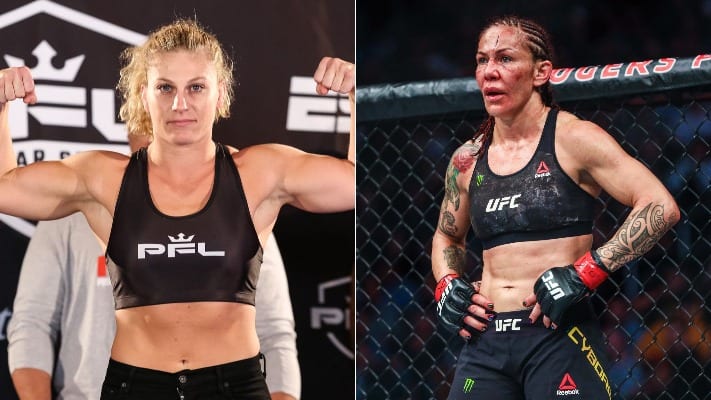 Cris Cyborg has been at the top of the food chain in regards to women’s MMA since it’s inception. Whilst her loss to Amanda Nunes knocked her off the pedestal of WMMA Goat, she still holds a level of skill and power that few can replicate. Alternatively, Kayla Harrison is the one of the latest athletes to transition into the spirt of MMA. Harrison won gold at the 2012 Olympics in Judo, and currently holds an 8-0 record in MMA. With wins in both Invicta and the PFL, Harrison is rapidly making a name for herself. However, she currently fights at lightweight, a division that currently lacks a wide variety of talent in WMMA.

Cris Cyborg recently offered a potential answer to Harrisons search for worthy opposition, as reported by BJPENN. In an interview with James Lynch on The Catch Up, Cyborg was asked her thoughts on Harrison and a potential matchup between the two. The Bellator champ stated that “A couple fights I’ve seen her. I believe she’s fighting girls under or below her skill. The girls aren’t on her level. But she’s doing great, this is a strategy [by] her manager.”

Cyborg is currently the Bellator featherweight champion, and is coming off a win against Arlene Blencowe. Harrison is coming off a one off Invicta fight, in which she finished Courtney King in the second round. Alternatively, multiple weight boxing champion Claressa Shields is another top level athlete who has recently transitioned to MMA. Shields has also stated that she would be interested in a matchup with Harrison in the future.

What are your thoughts on a potential Cyborg Harrison matchup?