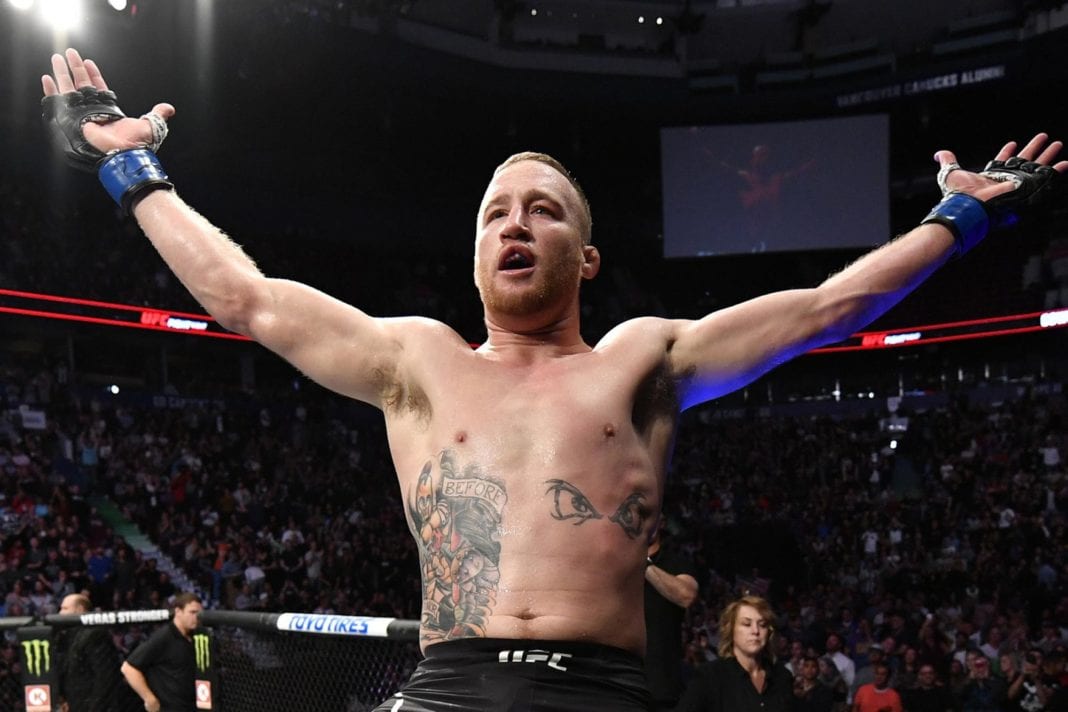 UFC Interim Lightweight Champ Justin Gaethje made an appearance on the Joe Rogan Experience yesterday where he talked about a variety of topics, including his personal plans for his next (and potentially last) three fights. He specifically named Khabib Nurmagomedov, Conor McGregor and Dustin Poirier as his list of fights he wants next before departing.

Gaethje is expected to face Khabib for the undisputed Lightweight title later this year before setting his sights on McGregor and Poirier. Gaethje went on to elaborate. (H/T BJPenn.com)

“I’m in a great position because, for one I get to fight for a title, There’s 500 some odd people on this roster, every single one of them would want to be in my position right now. But I also have the ability to bring some kind of rhyme or reason, a way, a way to a title shot. For young guys that come in, they think politics run the show. They ultimately do, but there is a small chance that you get a say in your destiny and eliminate politics. That what I just did. Politics were gonna f*ck me. I wasn’t going to get the fight. Conor was going to somehow or some way get that fight. Now, I got the chance to go out there and I did what I did.”

This is all contingent on of course if he can pull of the victories. Gaethje and Mcgregor have jawed at eachother recently where Gaethje cited McGregor was “losing clout” amongst fighters.

Gaethje believes a series of victories over Ferguson, Khabib, McGregor and Poirier would put him in elite level legendary status. He added that this is all he would need in order for him to hang up the gloves, “Fight Poirier and then get the f*ck out of here,” Gaethje said. “That’s all I need. What do I need after that? That’d be legendary, I’d make plenty of money – which is ultimately what I’m here to do – and I took control of my destiny, which is all I asked for. Business wise, the smart move right now could be to fight Conor, because obviously that’s a lot of money, but I make way more money when I beat Khabib and then fight. And if Conor’s not there, I’ll fight Poirier. He’s not on my list. Khabib and Poirier are the two on my list right now. If I fight them two, with big paydays, then I’m good.”

Certaintly an inrgiuing scenario with some big pay days ahead for Gaethje.

Do you think Justin Gaethje Would Retire If He Pulls Off These 3 Straight wins?