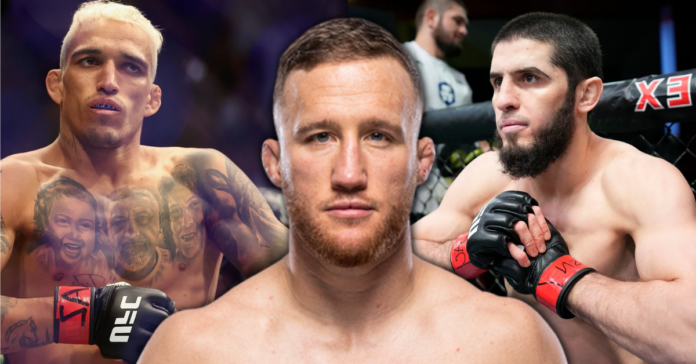 In an exclusive interview with Makoa Goble of LowKickMMA, the lightweight UFC fighter Gaethje explained that he has a pick, but also recognizes that anything can happen:

“The main part of that statement is going to be Oliveira’s ability to not be submitted by Makhachev. If he doesn’t get submitted, then most likely, he’s on his back for three rounds or more. And Makhachev wins a decision. That’s what everyone if you know anything about this that’s what you think is supposed to happen. But if you just watch Kamaru’s fight then you know that this is the best sport in the world because anything can happen at any given moment.”

Gaethje is referring to Kamaru Usman winning the majority of his welterweight title fight against Leon Edwards until Edwards scored a head-kick knockout in the final minute of this bout to capture the welterweight crown.

The 33-year-old Gaethje sounds as though he largely supports the Brazilian “do Bronx” Oliveira. The former WSOF champion continued:

See the full interview with LowKickMMA and Justin Gaethje below:

What’s next for Justin Gaethje?

The American fighter Justin Gaethje has made it clear that he wants the UFC lightweight world championship. He has been a perennial top-contender for several years and is considered one of the most exciting fighters in MMA. But he still wants that UFC gold.

While speaking with LowKickMMA Gaethje said that he is two wins away from another shot at the title. He said:

“I only win one way and that’s the highlight fashion. I think it could be one [fight] depending on who. But most likely two ‘Justin Gaethje finishes’ and then I’m back in it. That’s the plan.”

Gaethje was a perfect 17-0 before making his UFC debut. The US-born athlete has gone 6-4 in the UFC with all of his losses being against current or former champions. He has also notably earned multiple ‘Fight of the Year‘ awards from many publications.