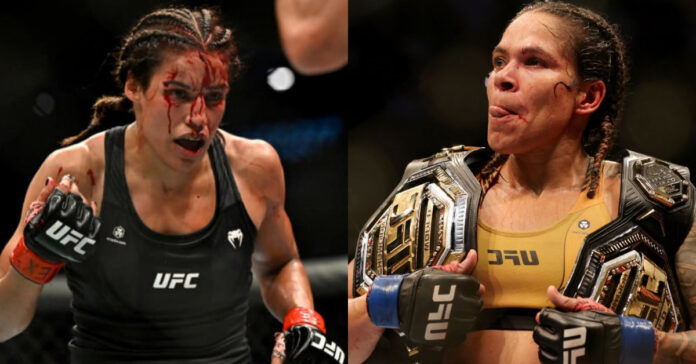 Julianna Pena wants to settle her score with Amanda Nunes before the end of the year.

Coming off a lopsided decision loss to Nunes in the rematch, Pena lost out her UFC women’s bantamweight throne at UFC 277. Pena had shocked the world in their first outing by finishing arguably the greatest female mixed martial artist of all time. Her defeat in the second match has the ladies evenly matched up with each of them getting a win.

Nunes switched her game plan for the main event last month, utilizing a southpaw heavy stance and a different fighting style. Her changes certainly worked as she avenged her loss with a dominant victory that saw her break the women’s record for the most knockdowns in a round.

“When someone has entirely revamped and completely switched their entire stance, and their entire fighting style because of me, I take that as a complement, you know?” Pena said (ht MMA Junkie). “And I think that if you give me time to get ready for both stances of Amanda, she doesn’t touch me next time. I’m just really hoping that she heals up and that she’s able to get back in there before the end of the year because I’ll absolutely be ready for that trilogy fight.”

Pena is ready to start round 8 with Nunes after sharing seven rounds with her in the past two showings.

Do you want to see Amanda Nunes vs. Julianna Pena 3?