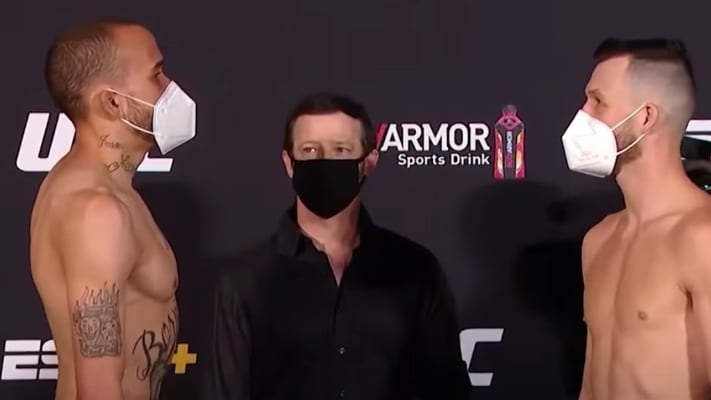 Kicking off the UFC Vegas 4 main card at the Apex facility is a catchweight bout between Sean Woodson and Julian Erosa.

Round 1: Woodson starts off with a stiff jab and is the one advancing early on. Erosa lands a leg kick. Woodson returns with one of his own. Woodson lands a nice left. He misses with a flying knee but lands a leg kick soon after. Erosa starts landing a couple of leg kicks. Woodson lands a couple of punches but Erosa eats them. He momentarily attempts a takedown attempt against the fence but returns to striking. Woodson blocks a head kick but eats a knee to the head. Woodson lands a quick one two. Woodson is clinched up against the fence but Erosa separates soon after. Erosa slips but may have been pulling guard as the round comes to an end.

Round 2: Erosa is the one pressuring and clinches him up against the fence. He lands an elbow on Woodson but the latter is fine. Woodson lands a body kick and Erosa returns with a combo. Woodson still seems to be in control despite taking a lot more damage this round. Erosa lands some nice body shots and is continuing to pile on the pressure but Woodson is calm and moving well. Woodson is returning with some jabs and hooks. The round ends with Erosa clinching him against the fence.

Round 3: Erosa tries to clinch Woodson but gets dropped with two punches. Erosa keeps fighting as he gets up and attempts a flying knee. They return to striking. Woodson is landing a lot more strikes now which seem to be doing damage. Erosa attempts a takedown but is unable to get Woodson down. Erosa lands two takedowns but Woodson gets up. However, Erosa has his neck and sinks in the D’arce choke to get the tap!