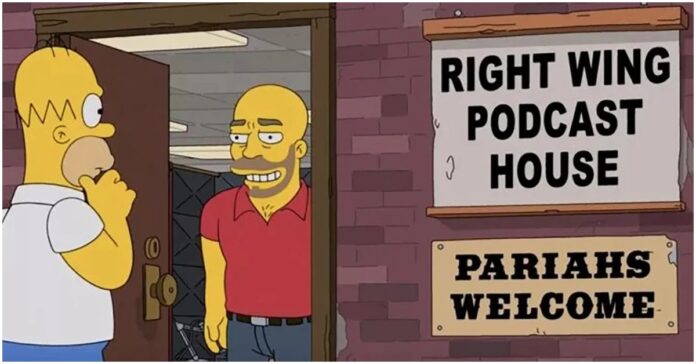 Joe Rogan has been in the news lately for all the wrong reasons.

The long-time UFC commentator and popular podcaster has found himself in hot water as of late for a couple of different reasons. Rogan first faced backlash for spreading what many believe to be COVID-19 misinformation on his show. This led to several high-profile music artists threatening to leave the Spotify platform. More recently, the 54-year-old was forced to apologize after a compilation of him using a racial slur appeared online.

Rogan skipped UFC 271 amid the drama but made a triumphant return to his broadcast duties earlier this month when he joined Michael Bisping and Jon Anik in the booth for UFC 272.

The MMA legend has now been spoofed by “The Simpsons” in the divisive Season 33, Episode 14 episode, titled “You Won’t Believe What This Episode is About—Act Three Will Shock You!,”

In the episode, Homer is blamed for leaving the family dog, named Santa’s Little Helper, in a hot car. This leads to the donut-loving dope being shamed by the public, Newsweek reported. Things go from bad to worse when Homer tries to apologize, and inadvertently knocks Reverend Lovejoy out of the church window. The incident is caught on camera and subsequently goes viral on social media, causing the Simpsons patriarch to lose his job and become ostracized by his friends, co-workers, and family.

Homer eventually meets up with Joe Rogan’s doppelganger, who is the only one willing to talk with him following his cancellation. The UFC icon is never explicitly mentioned by name, but he is represented by a generic “Right-Wing Podcast” host that welcomes pariahs onto his show.

What do you make of The Simpsons featuring Joe Rogan in their latest episode?