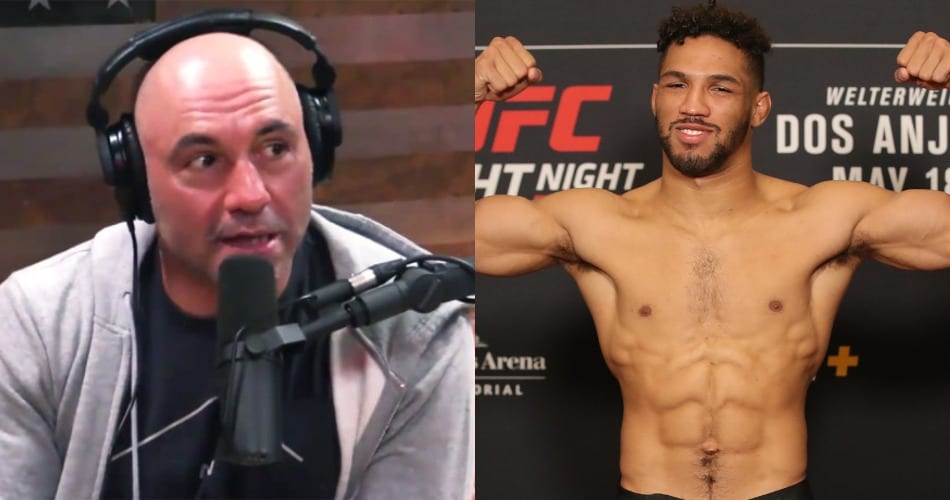 It has been a rough past few fights for former interim UFC lightweight title challenger Kevin Lee.

Lee has dropped his past two fights inside the Octagon to Al Iaquinta and Rafael dos Anjos. The latter came in the main event of UFC Rochester last week (Sat. May 18, 2019), where “RDA” submitted Lee in the fourth round with an arm-triangle choke.

It’s quite the fall from grace for “The Motown Phenom,” who was once on a five-fight win streak, and challenged for the interim lightweight title against Tony Ferguson – a fight he nearly won, but came up just short while competing with a staph infection. On a recent episode of his podcast, UFC commentator Joe Rogan offered his thoughts on Lee’s recent struggles.

Rogan said he thinks it’d be a good idea for Lee to train with famed mixed martial arts (MMA) coach Firas Zahabi, the longtime coach of the legendary Georges St-Pierre:

“Kevin Lee needs a camp. I think Kevin Lee should go to Firas Zahabi. The reason why Firas Zahabi is, Kevin Lee’s skill set is very similar to Georges St-Pierre’s. Good striking, very athletic, great timing of takedowns, no one knows how to coach that better than Firas Zahabi. That’s what I think.”

At 26-years-old, Rogan said Lee has a small window as an athlete, approximately 10 years. He believes the death of Lee’s former coach Robert Follis really took a toll on Lee as a person, and as an athlete:

“It’s no disrespect to any small camps. An athlete has a small f*cking window, man. Kevin is 26, right? So he’s got 10 years. Not good. Before that, he was beating guys in pretty spectacular fashion. Robert Follis’ death had a tremendous impact on him as a fighter, as a person, and then he fought some really great fighters on top of that.

“Al Iaquinta, man. From the jump of that fight, the get-go, when he hit him with that spinning backfist, he let him know, ‘You’re in a dog fight, man.'”

Rogan then doubled down on his belief that Lee needs to make some changes, as the talented lightweight and welterweight competitor has all the tools to be a champion. All he’s missing is his “maestro”:

“He 100 percent can be champion. He’s just gotta make some changes – he needs a maestro, he needs a f*cking conductor. He needs a Greg Jackson or a Matt Hume, Firas Zahabi, Duke Roufus.””””