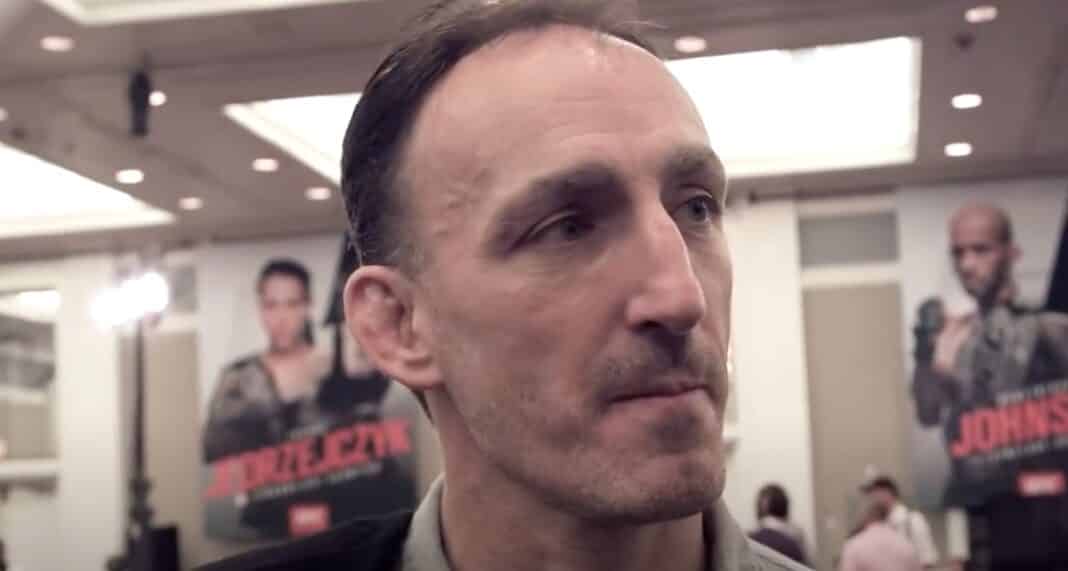 Matt “the wizard” Hume grew up in the suburbs of Kirkland, Washington just outside of Seattle. Since Matt was a kid, he had always been a dedicated student of the martial arts.

He practiced and competed in various martial arts from wrestling, boxing, and karate. After graduating from high school, Hume would attend Central Washington University.

At the university, Matt Hume would wrestle and also open a Pankration club at the school. An ancient form of MMA that trained all aspects of fighting from striking to grappling.

After graduating from college, Matt Hume would immediately change his focus to fighting. He would compete in WKA kickboxing events and win the organization’s super welterweight title.

Then in 1994, Matt Hume would get in contact with the promotion Pancrase. The very first shoot style organization out of Japan that predates the UFC.

This was the kind of fighting that Hume had always wanted to be a part of and jumped at the chance. Matt Hume would fly to Japan to meet Katsuomi Inagaki at Pancrash 3 in his very first MMA fight.

Hume would fight well, but would lose by points. In his second pro fight, Hume would bounce back to win by RNC against UFC vet Scott Bessac at Pancrase: Road To The Championship 1.

Matt Hume would then hit a rough patch in his career dropping his next 3 fights. Although the losses would come against the best in the world at the time. Including UFC vet Jason Delucia and future UFC hall of famer Ken Shamrock within the Pancrase promotion.

The Washington native would bounce back with a quick submission win and then lose by points to wrestling legend Minoru Suzuki. After 7 fights in 1994, Matt Hume would take a 2 year break from fighting.

His return fight would be two years later, beating catch wrestling expert Erik Paulson by doctor stoppage. Then he would break the nose to beat another future UFC hall of famer in Pat Miletich.

In between his fight with Miletich and his last fight, Hume would compete in different grappling competitions. The first was defeating olympic gold medalist Kenny Monday in a PPV event.

After training with Hume, Prince Nayan would create the very first ADCC event in 1998. Matt Hume would win his first two matches, but pull out of the tournament after tearing his ACL.

The wizard’s last fight would take place in 2002 for the promotion HooknShoot. Winning his last MMA fight by ambar in the first round.

Matt Hume had actually been coaching pankration ever since he started a pankration club at CWU. Once he graduated from college, he would open AMC Pankration in 1991.

It is the oldest MMA gym in North America and the second oldest in the world. While he was fighting, he was running his gym in his hometown of Kirkland.

He trained students in every form of fighting from kickboxing, boxing, and early MMA. The wizard’s philosophy has been to train his fighters to be the best at every aspect of fighting.

This philosophy would help him create champions in every combat sport including in MMA.

On top of being an accomplished fighter and coach, Matt Hume has also worked within the best promotions in the world. He was the rule director and official trainer for Pride FC and Dream.

In 2011, Matt Hume was brought on as head official of ONE Championship. Then he would become the vice president of operations for the company.

Matt Hume has been a MMA coach for over 30 years. He has coached numerous world champions in every combat sport with the most being from MMA. Here are some of his most notable MMA fighters.

Arguably Matt Hume’s best student ever is the former UFC flyweight champion, Demetrious “Mighty Mouse” Johnson. Might Mouse is the archetype of a fighter that Hume wanted to develop. He is great at every facet of the game and learned it all under Hume.

Johnson grew up in Washington state in Parkland that is near Kirkland, Washington. He excelled at high school sports and would make it to state in track, cross country, and wrestling.

After high school, Johnson attended college close to home to help out his deaf mother. Since he wanted to stay active and loved wrestling, Demetrious started training AMC Pankration.

He had his first fight in 2007 and won the bout by KO in the first round. Mighty Mouse would continue dominating the smaller circuit of MMA shows throughout Washington and Alaska.

Winning the first ten fights of his career with 8 being by knockout or submission. His next 3 bouts would be for the WEC right before the company merged into the UFC and went 2-1.

Mighty Mouse made his UFC debut in 2011 beating Kid Yamamoto by decision and then Miguel Torres in his 2nd appearance. This would set him up for a bantamweight title shot against then champ Dominick Cruz.

Johnson would lose a decision and then go down in weight to fight in the inaugural flyweight tournament. He would fight to a draw against Ian McCall, win the rematch, and then beat Joe Benavidez. Becoming the first ever UFC flyweight champion.

The reign of Mighty Mouse would last for nearly 6 years and break the record for most UFC title defenses.(11) During this run, he was considered the P4P best in the world.

Then after losing his title to Henry Cejudo, Johnson was traded to ONE Championship for Ben Askren. The first ever trade of talent between MMA promotions.

He would win the 2019 ONE flyweight grand prix and then lose the championship bout by TKO to Adriano Moraes. This was the first time Johnson had ever been stopped.

His current record is 30-4-1 and is considered one of the best lower weight class fighters of all time.

Another one of Hume’s top fighters is current ONE bantamweight champion Bibiano “The Flash” Fernandes. A long time veteran of the sport that has emerged as one of the world’s top bantamweights late in his career.

It wasn’t easy for Bibiano growing up as his mother passed away at an early age. He was forced to live with his aunt in the Amazon and grew up very poor.

At 13, there was a local BJJ gym near him, but he was unable to pay the tuition. But the instructor made a deal with Fernandes to clean the mats in exchange for classes.

When he was 24, he would have his first MMA fight win, but he would lose his next two fights. Facing stiff competition early on against Urijah Faber and Kid Yamamoto.

After losing to Yamamoto, Bibiano would turn his career around. Boosting his record to 10-3 and having most of his fights in Japan during this time. The Flash would then make his debut for ONE Championship in 2012, where he has competed ever since.

Fernandes would win the interim bantamweight title in his first bout in the promotion. Then he would become the undisputed champion in his second fight in ONE.

With that win, Fernandes would defend his title 6 times in 6 years. He would then have a trilogy with his rival Kevin Belingon.

Josh Barnett is a legend in the sport of MMA and Hume was one of his main coaches during his career. Barnett started his fighting career when he was just 16 years old.

During his career, Barnett would go 35-8 and win the UFC and Pancrase titles. He fought in every major promotion in his three decade career with two runs in the UFC.

Barnett is currently signed to Bellator and was scheduled to be in their heavyweight grand prix. Unfortunately a failed medical test put him on the shelf and has yet to fight in the promotion.

Matt Hume has had one of the longest coaching careers in all of MMA. Trained numerous world champions in his over 30 years in the sport.

Hume is easily one of the greatest coaches of all time and this sentiment is shared almost universally through the sport. He will continue to train champions out of his hometown gym AMC.