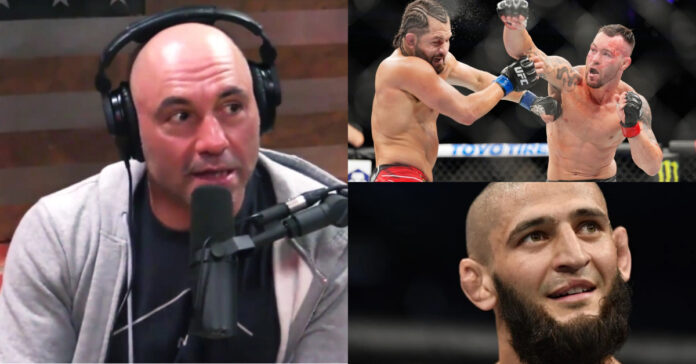 Joe Rogan would like to see the UFC pit Khamzat Chimaev against either Jorge Masvidal or Colby Covington.

Coming off a hard-earned victory over Gilbert Burns in April, Chimaev is set to face fan favorite Nate Diaz in the headlining bout of UFC 279 on Sep. 10 at T-Mobile Arena in Las Vegas, Nevada. “Borz” had a quick rise up the ranks after joining the promotion, which is why his outing with Diaz, who is not a ranked contender, appears even more puzzling.

In the Sep. 2 episode of his popular podcast show, Joe Rogan Experience, Joe Rogan hosted the former 170-pound champion, Kamaru Usman, after his shocking upset loss to Leon Edwards last month. Rogan talked about the two matchups he wants to see in the welterweight division and both of them include Chimaev.

“Now that fight I can get behind, more than maybe even the Nate fight,” Rogan said. “Masvidal versus Khamzat, I like that fight a lot. That’s interesting. Khamzat vs Covington is very interesting,” he added. “Yeah, (that’s the ultimate test), that’s your gatekeeper… Most people have said, before the Leon fight, that if it wasn’t for you, he would be the champion of the world. He’s that good. He’s got so much endurance man, it’s wild. He pushes a f**king crazy pace. The Woodley fight was one of the best examples. He could do it more.”

Company president Dana White had stated Chimaev vs. Diaz would be a top contender bout, but that was before the title changed hands at UFC 278. White indicated that an immediate trilogy bout between Usman and Edwards would be in the works but did not give a concrete response on what would happen to the winner of the main event this Saturday.

If Chimaev dispatches Diaz in a quick fashion, he could get paired up with a big draw like Covington or Masvidal.

Do you agree with Joe Rogan?