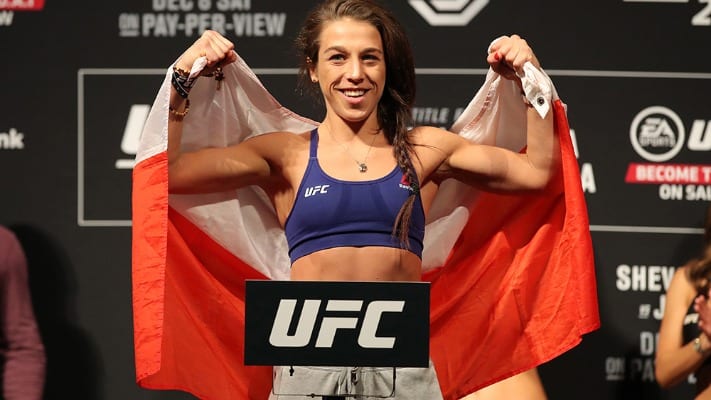 Carla Esparza is back in the title mix.

The former UFC Strawweight Champion, Esparza, first won the inaugural title after having defeated Rose Namajunas in the The Ultimate Fighter 18 finale. The crown wouldn’t stay on her for long as Polish striker Joanna Jedrzejczyk knocked her out in her first title defense.

A few bumps along the way wouldn’t stop Esparza from going back on the road to gold.

“”The Cookie Monster” would snack on a streak of 5 straight wins, currently the longest streak held in the division. A win over top contender Yan Xiaonan a few weeks ago would place her in title talks with rivaled champ Rose Namajunas.

While the case for a title shot was made clear by the campaigning Esparza, it is still unsure who will be next in line for Namajunas. Dana White is debating between her and recently dethroned champ Zhang Weili.

A person of interest that comes to mind when discussing these elite names is former champ, Joanna Jedrzejczyk, who has fought all three women inside the Octagon. ‘JJ’ has been sitting around, waiting for a title shot herself. In doing so, she would find some time to break down the current title picture at 115lbs.

“Congrats to Carla.” Joanna told MMA Island. “I’m happy that she has so many straight wins and she’s on this winning patch. Congrats, I’m happy for her because Xiaonan was not an easy opponent.

Though Jedrzejczyk praised her former foe on the win, she isn’t too sure it will warrant a title rematch against ‘Thug Rose’.

“I don’t know what’s next. It’s up to the UFC matchmakers and of course Rose Namajunas. It depends what she’s trying to do next, who she will fight next and what she decides. I don’t know.

“I feel like me or Weili Zhang could be a better matchup for Rose [Namajunas].” Jedrzejczyk continued. “Of course, I don’t want to take anything from Carla Esparza. I don’t know, maybe me or Weili Zhang, Carla could face one of us and see if she is really on this championship level.”

Do you want to see Joanna Jedrzejczyk rematch Carla Esparza?