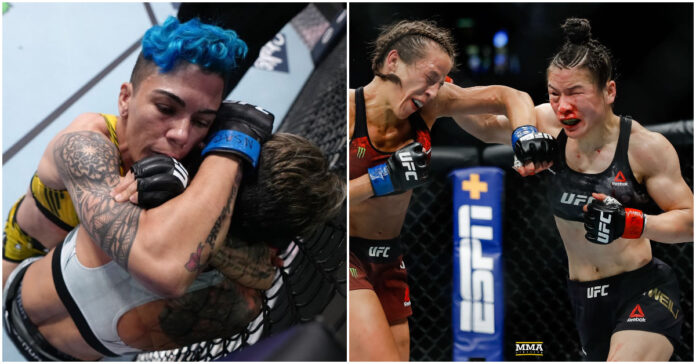 Jessica Andrade is looking to fight the winner of Weili Zhang and Joanna Jedrzejczyk after an exceptional submission win over Amanda Lemos.

Earning one of the evening’s “Performance of the Night” bonuses and an extra $50,000, Andrade marked her 14th UFC win and is now tied with Amanda Nunes for the most wins in women’s UFC history.

In the post-fight press conference, Andrade expressed her desire to fight the winner of Zhang and Jedrzejczyk 2 after a significant win. Having faced both Weili in 2019 and Jedrzejczyk in 2017, Andrade is looking to avenge either of her loss based on who comes out on top of that contest.

In March 2020, fans around the world witnessed one of the best fights in women’s MMA history when Zhang brawled it out with Jedrzejczyk at UFC 248. While Weili edged out a split decision win over her Polish counterpart, the battle was closely contested in what many believed to have favored Jedrzejczyk.

UFC Chief Business Officer Hunter Campbell told ESPN that a second fight between the two former champions has been verbally agreed for UFC 275. Perhaps, the greatest fight in women’s competition will go down again this June 11 in Singapore.

Jedrzejczyk will enter the bout unranked due to her two-year period of inactivity following her latest outing with Weili, who is bouncing off two losses to current UFC women’s strawweight champion Rose Namajunas she suffered last year.

The winner of the match may have their next opponent already waiting for them in Andrade should they come to an agreement once the event has taken place.

Do you think Jessica Andrade will avenge her loss against either Jedrzejcyk or Weili Zhang?