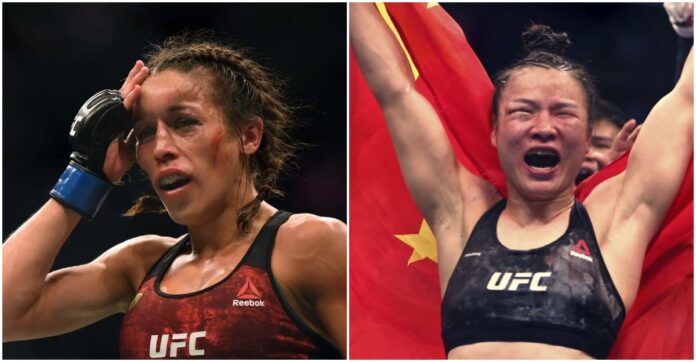 UFC chief business officer Hunter Campbell told ESPN that both Joanna Jędrzejczyk and Zhang Weili have verbally agreed to meet once more in what would be an electrifying rematch. UFC 275 goes down in Singapore on June 11th.

When Jędrzejczyk and Zhang had their first meeting at UFC 248, Zhang was left victorious by a split decision. Still, many fans believed Jędrzejczyk edged it on the night. Both former strawweight champions put on a masterly performance and had the T-Mobile Arena on their feet. After a classic back-and-forth war, it was destined that we would see these two women meet again.

Fans have been eager for Joanna Jędrzejczyk to return to MMA competition, but the Polish-born mixed martial artist insisted she only wanted big fights. None come bigger than the much-awaited rematch with Zhang.

Joanna Jędrzejczyk enters the bout currently un-ranked due to her long haul of inactivity. Her last outing was, in fact, against Zhang at UFC 248 over two years ago. Despite winning two of her last six bouts, the 32-year-old has already cemented her legacy among the greats of women’s MMA. Jędrzejczyk still holds the most title defenses and wins in the women’s strawweight division history. The ATT representative still has high hopes of securing UFC gold once more, and avenging her loss to Zhang will certainly put her on the right path.

Zhang is coming off two back-to-back losses for the first time in her professional career. Both losses were at the hands of current strawweight champion Rose Namajunas. Zhang looked unbeatable in her 21-fight win streak dismantling all of our opponents with sheer power, strength, and aggression. The Chinese born suffered a round one stoppage loss to Namajunas at UFC 261, followed by a split decision loss at UFC 268 seven months later.

Who do you see winning in this much-anticipated rematch?