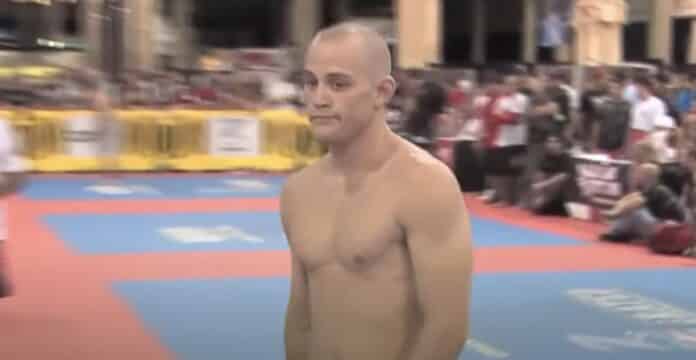 Jeff Glover was born in East LA, California. He discovered Jiu Jitsu when he was 16 years old and wanted to dedicate his life to training.

Glover began training at Paragon Jiu Jitsu under Professor Richard “Franjinha” Miller. Professor Franjinha became a mentor to Jeff and Paragon has been his home gym for over 20 years.

Jeff Glover would become a gym rat and would spend hours a day on the mat. Training alongside another future BJJ innovator Bill “The Grill” Cooper and Franjinha’s first black belt Tyrone Glover.(no relation)

Not too long after he began training, Glover would begin competing and have immediate success. Spending most all of his weekends going to compete at various Jiu Jitsu competitions.

Since this was early in Jeff’s career and Jiu Jitsu wasn’t profitable, he would take part-time jobs to pay for competitions. One job that Jeff would have for a short time was a professional plumber. This would earn one of his many nicknames, “The Pipelayer.”

In competitions, Glover was not afraid to test himself. It was normal for him to enter absolute divisions going against some of the biggest and most skilled competitors.

Glover being a featherweight, would get a lot of attention for entering absolute divisions, which was rarely done during this time. He would routinely win in absolute divisions and get crowds into his matches.

In late 2004/early 2005, Glover would earn his brown belt and was ready to take his game to the next level. Between 2005 and 2006 were Glover’s most successful years as a colored belt competitor.

He would win back to back gold medals at the IBJJF Pan Championships. This would lead to Franjinha Miller to award Jeff with his black belt.

Jeff Glover’s hard work had paid off and he was ready to take on the world’s best.

Fresh off of receiving his black belt, Jeff Glover would immediately go right back into competing. This time against the world’s best at black belt.

He would compete against some future legends in the sport from Robson Moura to Bibiando Fernandes.

In 2007, Glover would qualify for his first ADCC Championship in the 66 kg division. Jeff would win his first match by flying triangle that brought the crowd to their feet.

His next match would be a loss by points against 2x ADCC champion Leo Vieira, but Jeff Glover made his statement.

During his 2008 run, Glover came up just short of winning the No-Gi championship. Losing by advantage to multiple time champion Cobrinha Charles.

Then in 2009, Jeff would make his 2nd ADCC appearance going 1-2. Losing by points against Ryan Hall and UFC vet Rany Yahya.

In between these major championships, The Pipelayer would make frequent appearances at Grapplers Quest events. Jeff holds the Grapplers Quest record of 27 tournament wins in 8 years of competing with the organization.

During the late 2010s, Jeff Glover would suffer numerous finger injuries. These injuries to his fingers would force him to compete in more No-Gi events than Gi events.

After taking time off due to injuries in 2010, Glover would come back to competitions in 2011. Starting the year off by winning the ADCC trials with 3 submission wins.

The 2011 ADCC Championship would be his best showing ever at the grappling competition. He would win his first two matches with one by points and the other by his patented darce choke.

Glover would lose a close rematch against Cobrinha in the semis to set up another rematch with Robson Moura. This time, Jeff would submit Moura with a guillotine choke to earn 3rd place in the 66 kg division.

During the 2010s professional grappling events began to get popular and Glover competed at many of the events. Competing at early Metamoris events and the first Eddie Bravo Invitational.

He took off his suite and had spats under his dress pants. The two would have a fun match that would end in a draw.

Then later in 2014, Glover would compete at the first EBI event. Winning his first 2 matches by kneebar before losing in the finals against Geo Martinez.

Jeff Glover would compete a handful of times between 2015-2017 before he stopped competing. He lost in his last appearance at ADCC 2015 in a rematch to Geo Martinez.

Then he would compete sporadically between 2016 and 2017. Most notably competing against 10x world champion Bruno Malfacine at Metamoris 7 to a draw.

Jeff “the human monkey” has been widely touted for his style and innovations he has made in Jiu Jitsu. Chris Hauter was quoted as competing against Glover was “like trying to grapple a monkey or a cat. He never loses his balance.”

Glover’s amazing balance was due to the training he would do with a yoga ball. To improve his balance, Glover would get on top of a yoga ball and roll from position to position. Many grapplers have adopted this technique to work on their balance.

He has also developed and innovated quite a few different Jiu Jitsu techniques. Particularly the deep half guard, darce choke, triangle choke and his patented donkey guard.

Jeff Glover was one of the first grapplers to popularize the deep half guard. Using a variety of different methods to get under his opponent and sweep them.

The Pipelayer would also develop numerous entries to hit a darce choke. Including hitting the move to escape side control or dive into it from top position.

His triangle choke is like no other in Jiu Jitsu. Jeff developed his patented hanging triangle that has become widely taught in most academies.

Then there is the donkey guard. Glover developed this guard as a bit of a joke and to also get fans into his match.

Glover is also considered to be one of the biggest personalities in all of Jiu Jitsu. Famously creating an online reality show called Glover’s Travels.

A series from Budo Videos, where Jeff would go around the world to different Jiu Jitsu gyms. Learning new techniques and making friends with numerous top instructors.

Jeff has also worked as a color commentator for many Jiu Jitsu events and is a popular podcast guest. Frequently appearing on some of the biggest Jiu Jitsu podcasts in the world.

One other thing that Glover is known for is being an advocate and user of cannabis. Most notably taking part in the first BJJ/cannabis event High Rollerz. Where he smoked a joint with his opponent as Eddie Bravo was the referee.

Jeff “The Pipelayer/Human Monkey” Glover has contributed so much to the art of Jiu Jitsu. His passion led him to not only being one of the best competitors, but one of the best teachers.

Glover has developed so many phenomenal techniques that have innovated the sport. Creating numerous instructional videos that are widely popular.

Now that Jeff Glover has retired from competition, he continues to teach Jiu Jitsu at his home Paragon. Sharing his knowledge and helping his students develop their skills. 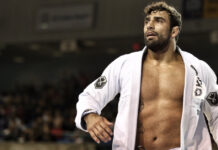