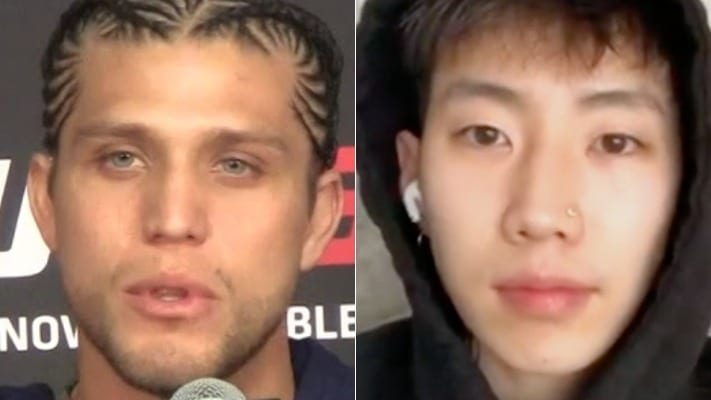 Korean musician Jay Park does not plan on filing charges against Brian Ortega.

Park — who translates for the Korean Zombie — was slapped by Ortega in the crowd during UFC 248 this past weekend. Ortega reportedly had a problem with the way Park had translated recent comments about him from Zombie.

Park filed a complaint to the police soon after but appearing on Ariel Helwani‘s MMA Show on Monday, revealed he hasn’t decided on whether he will press charges against the former featherweight title challenger:

Park also detailed how the incident went down:

“He’s like, ‘Hey dog, are you Jay Park?'” Park explained. “It kind of caught me by surprise. As I stood up, he like smacked me. … It was very narrow. There were chairs behind me, so I kind of fell back, and then I got up and I kind of pushed him.

“… What is he doing coming and attacking me? I could understand if I was talking s— or I was egging him on or whatever. But I was a fan of the dude. I was following him on Instagram. It was a really bad representation of himself. It was not a good look for him, bro.”

As for his translation, Park claims he did nothing wrong as he was just translating what Zombie was saying about him from Korean.

“For me, to be honest, I don’t feel like I did anything wrong,” Park said. “I just translated. I never put words in Zombie’s mouth. I’ve never put up a [social media] caption for him. I never told him to trash-talk. I have a lot of respect for fighters. They put everything on the line — they train hard, they fight for their family.”

Park also took a dig at Ortega on Sunday:

Zombie, meanwhile, was not pleased with Ortega’s actions and has since called for a fight with “T-City” as he plans on knocking him out.

What do you make of the whole situation?