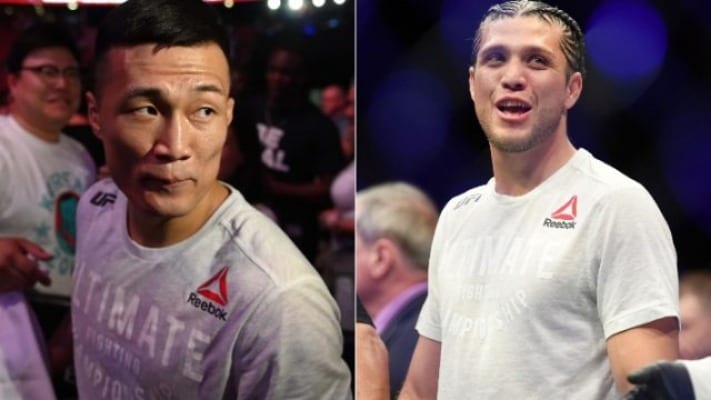 Featherweight contender Brian Ortega is in hot water as it has been revealed Korean rapper and friend of ‘Korean Zombie’ Jay Park has filed a police report after being assaulted at UFC 248.

Ortega and Chan Sung Jung have a simmering rivalry which reached the next level last month. ‘Korean Zombie’ appeared on the Ariel Helwani Show and had some choice words for the former title challenger via his translator Park. He accused Ortega of ducking him.

The 145lb contenders were supposed to meet at UFC Busan in December however the fight fell through at late notice with Ortega citing an injury, Korean Zombie instead fought and beat Frankie Edgar in his homeland.

Ortega is apparently still annoyed about the comments and directed his anger at Park. According to eyewitnesses Ortega approached Park and slapped him whilst ‘Korean Zombie’ was in the bathroom. Ortega was kicked out of UFC 248 and could face further repercussions for his actions.

According to the manager of ‘Korean Zombie’, Jason House of Idrium Sports Agency a police report has been filed against Ortega. In a statement to MMA Junkie House explained the UFC had requested both fighters behave appropriately at UFC 248, something his fighter honored throughout the night, he said.

“Both teams were contacted prior to last night’s event and were asked by the UFC to be respectful and to not have any confrontations,” House wrote. “Our team respected the UFC’s request and maintained our professionalism throughout the night. Police reports were filed immediately after the incident occurred and now it’s a matter for law enforcement officials to handle. Korean Zombie has always been a class act and will continue to be. Our objective remains the same; to put ourselves in the best position both inside and outside the cage to become the featherweight champion this year.”

Should Brian Ortega face criminal charges for his actions at UFC 248?