LowKickMMA.com
Home UFC News Javier Mendez claims Islam Makhachev is the most well-rounded lightweight of all... 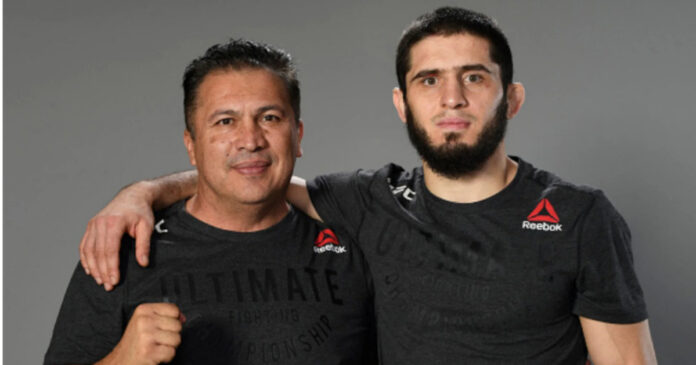 Mixed martial arts coach and founder of the American Kickboxing Academy, Javier Mendez, has claimed that Islam Makhachev is the most well-rounded lightweight “of all time.”

It has been an inevitability for some time now that Islam Makhachev would at least challenge for a UFC title at some point in his career.

Now over seven years since his promotional debut, Makhachev will have the chance to prove many, who have tipped him for greatness, correct when he takes on Charles Oliveira for the vacant lightweight title at UFC 280.

Whether it be training partners, friends, or onlookers, many felt Makhachev was a real force to be reckoned with, but his coach Javier Mendez says he is much more than that. Talking to Submission Radio, Mendez proclaimed Makhachev as the most well-rounded lightweight ever.

“You don’t know what you’re dealing with until you’re dealing with him,” Mendez said. “That’s what everybody that’s dealt with Islam, they thought they could do better, until they get in there and they didn’t. He is so well-rounded. I am going on record saying as the lightweight, he is hands down the No. 1 of all time, best in all areas.“

“No. 1 of all time, Islam Makhachev. Best defense, best striking, best everywhere. The best all-around athlete. Way, way back in the day I thought it was Frank Shamrock that was the best well-rounded athlete, and he was in all divisions. But in the lightweight division, for me, the person that’s the best-rounded in every single area is Islam Makhachev.”

While Makhachev’s talent is undoubted, he still has a massive test in front of him when he takes on Oliveira in just over two weeks.

Oliveira is riding an 11-fight win streak and has beaten Tony Ferguson, Michael Chandler, Dustin Poirier, and Justin Gaethje within the past 18 months.

Mendez seems to draw confidence from the fact that Makhachev was the only person to ever present former lightweight champion, Khabib Nurmagomedov any problems.

“No one’s ever won a sparring session,” Mendez explained. “Not a sparring session with Khabib ever. Except one man. Islam. He’s the only one that has won rounds from Khabib. Never won a session, but he’s won rounds. And I’ve never seen that. So, obviously, when Khabib talks about the next heir, he’s not saying something that he’s trying to make up and make people believe.”(H/TMMAJunkie.com)

Who have you got, Charles Oliveira or Islam Makhachev?