LowKickMMA.com
Home Global MMA Jared Gordon reflects upon his struggles with MMA ahead of UFC 278:... 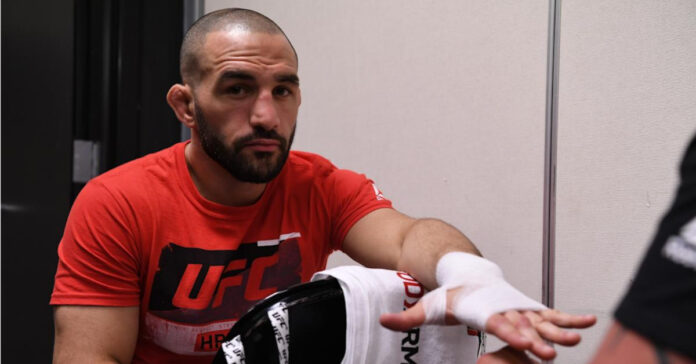 Jared Gordon spoke openly on the impact of competing in MMA and its effect on him ahead of his UFC 278 matchup against Leonardo Santos this upcoming weekend.

Competing in Mixed Martial Arts is extremely challenging not only on the body but the mind also and can have a serious toll on the athletes that choose to follow this path. In comparison to the challenges UFC lightweight Jared Gordon has already overcome in his life, this is nowhere near the same level.

Speaking openly in an interview back in 2017 Gordon revealed a low moment within his life when the now 33-year-old was struggling to deal with addiction and found himself absorbed by the harsh realities that come with drug addiction. In Gordon’s case, it was originally painkillers but then lead to Heroin.

“I overdosed three times. I was facing 25 years to life at one point. I’ve been homeless, panhandling, I’ve been to psych wards. I’ve been to rehab 10 times, and I’ve had near-death situations.

“At this point, I just consider myself grateful and extremely lucky and blessed to be where I am.”

Jared Gordon Opens Up On The Reality of Competing In MMA

Having pulled himself out of a place that not many could have Jared Gordon now has a new perspective on not only his life but his career too. Speaking to the media ahead of UFC 278 fight week the 18-5 lightweight responded to a question regarding whether competing within the sport had helped him overcome the adversity that he had previously faced. Here is what he had to say.

“MMA hasn’t helped me at all. Actually, it’s made my life worse. I’m not even joking. MMA doesn’t give me any fulfillment, whatsoever,” he told reporters.

“I’m able to use my platform to help people through MMA, but whether I win or lose, three days later, I’m miserable again. Now, I gotta do it again.”

“It’s like drugs. I gotta look for another fix, or what’s next, what’s next? You see it all the time, these guys become multiple-time world champions, and they’re fighting into their 40s, looking for that next thing. They’re looking for something, they’re trying to fill a void.”

“All my shiny shit doesn’t do anything for me, my car. I’m wearing a Rolex right now, and it’s just for this (presser). I like it, but it’s like a burden on my life. I’m still paying it off, I’ve owned it for a year.

“Fighting… I love martial arts, it’s my passion, and I love competing. But now, it’s not for me. None of this is for me. It’s for the people that I’m trying to help.” (Transcribed by BloodyElbow).

Having overcome difficulties in his life before it is remarkable to see how far ‘Flash’ has come to this present day. Gordon will now have his focus on returning to the winning column this weekend as he takes on 42-year-old veteran Leonardo Santos. Gordon last competed inside the octagon at UFC Vegas 53 where he suffered a submission loss at the hands of Grant Dawson.

Jared Gordon was recently in the news for a different reason after the UFC lightweight was forced to subdue an attacker who came at him and his family with a baseball bat.

Do you think Jared Gordon will return to the winning column this weekend?