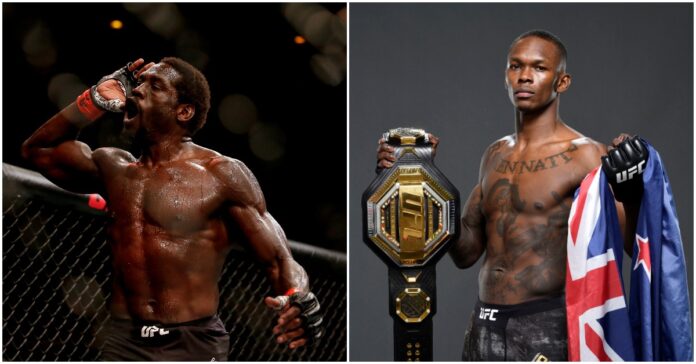 Jared Cannonier earned himself the next shot at the middleweight strap following his impressive TKO victory over Derek Brunson at UFC 271. Now Jared Cannonier is planning to complete the dream and take the belt from out the hands of ‘Easy Adesanya’.

On the same night that Robert Whittaker and Israel Adesanya battled out for the middleweight championship of the world, Jared Cannonier submitted himself as the next contender for that title when he was able to stop the re-surging Derek Brunson by TKO.

After promising to turn ‘Blonde Brunson’ into ‘Blood Brunson’ it appears Cannonier aims to live up to his prediction once more and turn the current middleweight champion into ‘Easy Adesanya’, he told The Schmo.

“I certainly did, I certainly did [live up to my last prediction],” Jared Cannonier said. “I’ve actually already come up with a new prediction for this one. We’re gonna turn ‘Izzy’ Adesanya into ‘Easy.’ It’s gonna be ‘Easy’ Adesanya.

“I’ve heard through the grapevine that it’s going down. I am next. Izzy is also a man of his word. From what I’ve seen, he also has the ability to choose his fights, and he has chosen me as if I’m some sort of Pokémon or something (laughs). Hey man, whatever it takes for me to get in there and get my shot at the title. I’ll put on that little Pikachu costume and go in there and shock the world.”

There is speculation that this matchup could take place in the summer at UFC 277 in July with the venue potentially being set in Cannonier’s hometown of Dallas, Texas. Something he considers to be almost perfect as he looks to become the middleweight champion of the world.

“That’s the perfect timing for me,” Cannonier said. “Knowing that I already had a fight after my last fight, you’re in shape from the last camp. Already have something to focus on, getting in the gym is easy as it always is because I love coming here. When you come in here [at The MMA Lab] and really focus on something, it’s like having a head start in a race.

Nothing has been confirmed regarding the location, but expect an announcement in the near future.

Who do you believe would walk away as middleweight champion of the world once these two compete?