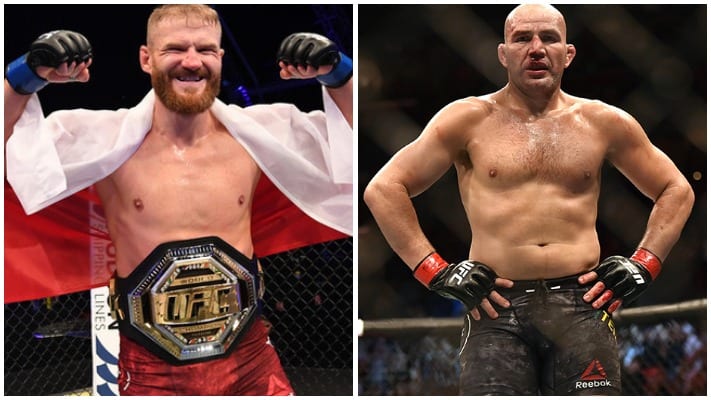 MMA fans will have to wait a little longer to see Jan Blachowicz attempt to make the second defence of his light-heavyweight title against Glover Teixeira.

The 205lb title bout was originally set for UFC 266 on September 5. However, that date clashed with a potential UFC London show and the fight was therefore pushed back until September 26. The fight has been delayed yet again. Blachowicz vs. Teixeira is now set for UFC 267 in Abu Dhabi on October 30 according to a report from AG Fight.

This news comes just days after Dana White talked up the UFC’s return to Fight Island.

“I’m flying to Abu Dhabi this summer and working on finishing building out the infrastructure of Fight Island,” White confirmed. “Not only is Fight Island not going away, but Fight Island is also going to be even bigger.”

“Fight Island is going to be so badass that it’s about to be this destination in Abu Dhabi for fight fans. This summer I’m going to announce it and walk everyone through what’s going on there. I’m super excited for that.”

Texeira has rallied during this latter chapter of his career. Currently on a five-fight win streak since 2019, Teixeira has looked dominant with notable finishes of top contenders such as Anthony Smith and Thiago Santos.

Blachowicz is on a five-fight win streak of his own that has saw him stop Dominick Reyes to claim the previously vacant 205lb belt before outpointing the highly fancied Israel Adesanya over 25 minutes earlier this year.

Do you think all this uncertainty surrounding their fight date could negatively impact Jan Blachowicz or Glover Teixeira ahead of this title bout?